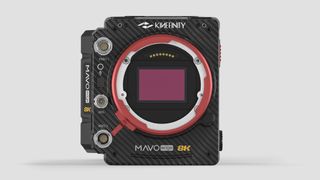 The 8K arms race continues to escalate with the announcement of the Kinefinity Mavo Edge, a monster cinema camera that's capable of recording 8K ProRes Raw internally at up to 75 frames per second.

The Kinefinity Mavo Edge features a new full-frame 44.7MP image sensor that can also record 6K up to 100fps and 4K up to 160fps (in Super 35mm), and in addition can produce oversampled full frame 6K DCI, 4K DCI and 2K DCI. The Edge also supports in-camera ProRes4444/XQ, ProRes422HQ and H264 proxy.

It's a technological leapfrog of both the Canon C500 Mark II and Canon C300 Mark III cinema cameras, as well as the upcoming video-oriented Canon EOS R5 mirrorless camera.

The manufacturer claims that the camera is capable of 14+ stops of dynamic range (15+ when oversampling), thanks to its 800/3200 dual native ISO system. This is supported by a new processing engine, which is also better at suppressing rolling shutter – restricting it to 12ms in 8K and just 9ms in Super 35mm.

For those familiar with the Mavo, one of the biggest upgrades for the Edge is a motorized internal neutral density filter system. This new 'e-ND' system is essentially the same as that seen in Kinefinity's external mount adapters, providing two to seven stops with stepless adjustment.

Despite being a behemoth in terms of performance, the new carbon fiber body weighs in at just 1.2kg – significantly lighter than something like the Red Monstro VV Brain, which weighs 1.51kg.

It also features a new design, eschewing the four-year-old form factor of Kinefinity's previous cameras, with a 105 x 121 x 119mm frame that "looks like the love child of an Arri Alexa Mini LF and a Red Monstro VV," according to the manufacturer.