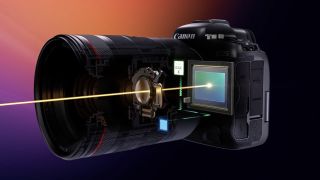 With the launch of the Canon EOS R5 and Canon EOS R6, Canon has finally embraced the power of in-body image stabilization (IBIS) – which was previously perhaps the single biggest omission from the EOS R system.

However, with the addition of five-axis IBIS to its two latest cameras, both the Canon EOS R5 and Canon EOS R6 are capable of a remarkable eight stops of stabilization, depending on the lenses that are used.

The stabilization system in the R5 and R6 will work with Canon's RF, EF and EF-S lenses, regardless of whether they feature in-lens IS (aka Canon's Optical Image Stabilizer). It will also work with third-party lenses as well as "dumb" lenses with no electrical communication.

That means that any lens you mount on the Canon EOS R5 or R6 – whether it's a Canon lens, a Sigma lens, a vintage lens, an expensive cine lens or a cheap manual focus lens – will benefit from a maximum 8 stops of stabilization.

So which glass will give you this premium IBIS performance? So far there are five Canon RF lenses that deliver the full eight stops:

What's remarkable is that the system doesn't rely on sync-IS to achieve its top stabilization. Unlike Olympus, Panasonic and Fujifilm's IBIS, which synchronizes with the IS in specific lenses to produce their respective maximum stabilities, Canon's IBIS system can deliver eight stops even on the Canon RF 28-70mm f/2L USM – a lens that has no stabilization at all.

This is no doubt thanks to the enormous image circle and outstanding edge-to-edge sharpness featured by the lens, as detailed below. And it should be pointed out that eight stops is the new industry best – even outpacing Olympus, whose 7.5 stops of IBIS in the Olympus OM-D E-M1 Mark III and E-M1X was the previous champion.

The incredible IBIS doesn't stop there, though, as there are a further three lenses that deliver a still-amazing seven stops of stabilization:

Again, it's incredible that the Canon RF 50mm f/1.2L USM – which doesn't possess any in-lens stabilization – immediately benefits from 7 stops of IBIS when mounted on the R5 and R6 bodies.

And that's not all! There are another two lenses that benefit from six or more stops of stability when used with the new bodies:

So there are 10 RF lenses that benefit from between 6.5 and 8 stops of stabilization on the Canon EOS R5 and R6. What Canon has yet to clarify, however, is the base or minimum number of stops provided by this IBIS technology.

Most 5-axis in-body image stabilization systems state 5 stops of stability, but Canon is being a little more measured at this point and explains that it is all down to the properties of individual lenses.

"What this is all about is the size of the image circle that the lens can project inside the camera," said David Parry, Product Intelligence Consultant at Canon UK.

"So if the image circle is really big, if the image quality on it is really good edge-to-edge, you're allowing the sensor to move around a lot, which will give you the image stabilization. And obviously that will vary depending on focal lengths and all the rest of it as well."

That would explain how the 50mm f/1.2L and 28-70mm f/2L, two lenses with no stabilization but huge image circles, can achieve 8 stops of stabilization purely from  IBIS – a trick that no other manufacturer has yet mastered.

So, while Canon may be late to the party when it comes to in-body image stabilization, it has spent that time finding new wrinkles to the tech that nobody else is capable of. Better fashionably late than never!