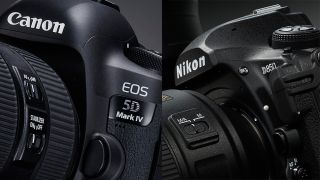 Canon launched the fourth camera in its ever-popular EOS 5D line, the EOS 5D Mark IV in 2016. Not to be outdone, Nikon released its D850 a year later, a model likely to be seen a direct challenger. And today, these are still two of the most popular professional cameras around.

Both of these DSLRs boast impressive spec sheets, but which is right for your photography?

The D850’s sensor is one of the camera’s biggest headlines, largely because the back-illuminated, FX-format unit contains a whopping 45.7MP – and no optical low-pass filter.

This is a significant step up from the 36.3MP sensor offered by the Nikon D810 it replaces, and it's the highest-resolution sensor ever found inside a Nikon DSLR.

This sensor is paired with Nikon’s powerful EXPEED 5 image processor, which enables an ISO range of 64-25,600 (expandable to 32 to 102,400 equivalents). That pixel count means the D850 has the ability to produce huge prints, or allow the user to crop in tightly, without compromising on image quality.

Canon’s EOS 5D Mark IV can’t match the resolution of the Nikon, as it tops out at 30.4MP, but Canon does offer its ultra high-resolution EOS 5DS and 5DS R cameras, each sporting a 50MP sensor.

Just like its rival, the EOS 5D Mark IV can produce large prints with plenty of scope for cropping, but in the megapixels war, Nikon pulls ahead this time around.

Many photographers who will be looking to purchase either of these cameras are likely to be professionals who may shoot video as well as stills.

Canon's EOS 5D Mark II was instrumental in converging stills and video for the enthusiast/professional market, and both of these cameras now offer tempting specs to videographers.

The EOS 5D Mark IV also employs the fairly inefficient Motion JPEG format, although this is a better choice for extracting stills from video, as images stand to be higher in quality. Another point of difference is the EOS 5D Mark IV's Dual Pixel CMOS AF system, which produces smooth focus during video (although we've yet to see what Nikon has done here).

Both cameras can also capture HD footage at 120fps, which can be used to create smooth slow-motion sequences, although only the D850 can do this in 1080p (the EOS 5D Mark IV uses 720p).

As you’d expect, the EOS 5D Mark IV and the D850 have headphone and external microphone ports, together with HDMI connections that allow you to hook up an external screen or record straight to an external device.

Both cameras shoot 4K time-lapse, but the Nikon can also create 8K time-lapse in post production. Overall, both cameras offer similar video specs and either would be useful additions to a videographer’s kitbag, but the D850 just edges ahead.

When it comes to continuous shooting, potential buyers need to dig a little deeper into the specifications to get the real story.

Both cameras can be set to capture at 7fps, but if you add a battery grip to the D850, this figure rises to 9fps.

This doesn't sound like much, but it's significant when you consider the high-resolution sensor, and would make a big difference when out in the field capturing sports of wildlife.

In terms of autofocus, the D850 pulls ahead. It features the same 153-point system found in Nikon’s speed king, the flagship D5, and the ability to focus down to -4 EV, which is useful in low light conditions.

By contrast, the EOS 5D Mark IV offers 61 AF points (41 of these being cross type), but all of them are f/8 rated, which means they can all be used if you added a teleconverter to your lens.

What’s more, the EOS 5D Mark IV includes the aforementioned Dual Pixel AF and Dual Pixel Raw technology. This is great for video, particularly as you can use the camera's touchscreen to smoothly pull focus between different pats of the scene.

While both cameras are fitted with 3.2in touchscreens, there's a big difference between the two models.

The EOS 5D Mark IV has a fixed screen, while the D850’s LCD is tiltable. Not only is this useful when setting up awkward compositions, but it also allows you to angle the screen for a better view when the light is strong.

The resolution of the D850’s monitor is also superior (2,359k dots vs 1,620k dots), which is sure to be appreciated by photographers looking to get a better view of what they're capturing.

The increased resolution, and the versatility of the tilting screen, may also be tempting to videographers looking to compose sequences more easily. So, here, the D850 comes out very much on top.

Both cameras sport pentaprism viewfinders with 100% coverage, although magnification on the D850 is slightly higher at 0.75x, next to the 0.71x offered by the EOS 5D Mark IV.

Both cameras make use of magnesium alloy in their build and offer weather-sealing to a high standard; photographers shouldn’t have any reservations taking these models into harsh environments.

In terms of build, the EOS 5D Mark IV is the lighter of the two units – 800g vs 1,005g (with body and battery) – and also has slightly more compact dimensions.

The design of the EOS 5D Mark IV builds on the success of the EOS 5D Mark III, so if current Canon photographers are trading up, they should instantly feel familiar with the layout. Likewise, Nikon hasn't also strayed too far from the template set out by its predecessors for its D850.

Both of these cameras have much in common. Neither, for example, offers sensor-based image stabilisation for stills, but there are plenty of compatible lenses that make use of the technology.

Both cameras offer built-in Wi-Fi and NFC, and both also have two card slots. The EOS 5D Mark IV offers one for SD-type cards and another for CompactFlash. This is the same arrangement as its predecessor, which this is a good thing as nobody wants to ditch media they’ve spent a lot of money on. The D850, meanwhile, also has one SD-type slot, but the other accepts XQD media.

Delve a little deeper into each camera's spec sheet and you'll find plenty of unique features that could well sway a buying decision.

Macro shooters will marvel at the D850’s Focus Bracketing mode, which can be set to take up to 300 shots at different with different points of focus, which can be subsequently merged together to create a single image with front-to-back sharpness.

The D850 also inherits the illuminated buttons from the D5, which can put an end to fumbling when working in low light. Lastly for the Nikon, because the D850 sports both electronic and mechanical shutters, images can be captured in complete silence – no doubt a great relief for any wedding photographer who has suffered the icy glare of a vicar while shooting during the service.

The EOS 5D Mark IV has some noteworthy features of its own, including the advanced Dual Pixel Raw technology that enables photographers to make micro-adjustments in post processing for maximum sharpness, as well as for bokeh shifting and ghosting reduction.

Built-in GPS, meanwhile, allows landscape photographers to mark and map locations for future reference, while the HDR video mode is an interesting addition to the movie functionality, one that enables users to get more details shadows and highlights when recording footage.

Canon states that the EOS 5D Mark IV is good for 900 shots between charges. That’s a decent amount and, for the average photographer, should be enough to last a full day. Better still, those upgrading from cameras like the EOS 7D Mark II or the EOS 5D Mark II will be able to use their existing batteries.

The D850, however, is considerably more impressive here, with Nikon claiming 1,840 frames between charges. Set up the optional battery grip and photographers can then go for over 5,140 image between charges – highly useful when out in the field and access to charging points is rare.

Canon’s EOS 5D Mark IV builds on the success of the EOS 5D Mark III, and further strengthens the reputation of the legendary 5D line of cameras.

What’s more, videographers that wish to shoot 4K footage but can’t stretch to the EOS-1D X Mark II should be pleased with the EOS 5D Mark IV’s movie-making capabilities, although the crop factor when shooting 4K may discourage those needing to retain wide-angle framing.

Nikon has clearly struck a huge blow to Canon with the D850, with its 45.7MP sensor, more advanced AF system (at least for conventional shooting), faster burst rate (albeit with the addition of a battery grip) and far better battery life. True, Canon also offers a similar pixel count with its EOS 5DS and 5DS R cameras, but the Nikon D850 seems to offer more in one package.

Considering either camera? Check out our best deals below.