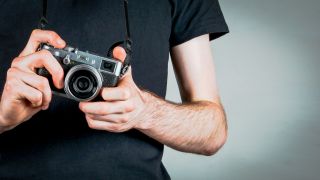 The best compact cameras can fit in a coat pocket but still offer the controls, features and even the image quality you'd expect from a DSLR or a mirrorless camera. Sounds impossible? Not at all – and here are the cameras to prove it.

A DSLR camera or a mirrorless camera has a big sensor for the best image quality, interchangeable lenses for flexibility and enough manual control for all kinds of creative photography. Unfortunately, they're just too big to carry around without a separate camera bag or holster.

Clearly something's got to give, and with the best compact cameras it's the ability to change lenses. You have to decide on the focal range you need when you buy the camera because there's no going back later.

Some photography purists are happy to not even have a zoom lens! Famous photojournalists of the past managed perfectly well with fixed focal length lenses in the past, and many photographers today are happy to follow in their footsteps.

So we've split our guide to the best compact cameras into two sections. The first section is for zoom lens compacts. These are the most flexible and useful in day to day use, but there aren't many that offer a big sensor and a zoom lens in a pocket-sized camera.

The second section is for hardcore purists, cameras with a fixed focal length prime lens. What you lose in day to day flexibility you gain in sensor size, image quality and photographic heritage! (Doing without a zoom is not as difficult as you might think and can actually make you see and take pictures in a different way.)

Canon really has done an amazing job with the G1 X Mark III. Yes, it is pretty pricey for a compact camera, but it houses pretty much the same 24-megapixel APS-C sensor in its slimline body as you'll find in Canon's EOS 80D DSLR and its EOS M mirrorless cameras. This is matched up to a zoom lens that's even more amazing, because it covers a 24-72 equivalent focal range and can still retract into the camera body when you're not taking pictures. It's true that the maximum aperture does drop off considerably as you zoom in, from f/2.8 right down to f/5.6, but you get this with compact DSLR and mirrorless kit lenses anyway. The G1 X Mark is pretty pricey, but right now it's pretty much in a class of its own for a premium compact camera with zoom.

If the PowerShot G1 X Mark III doesn't float your boat, this might

The Canon G1 X Mark III is a great camera, but it has some limitations, notably its 3x zoom with its relatively modest maximum aperture and no 4K video. The G5 X Mark II offers a much broader range of specs, and it's also a little cheaper. You do have to accept a smaller sensor – a still-decent 1-inch 20MP sensor rather than the 24MP APS-C sensor in the G1 X Mark II, but the payback is a longer 5x zoom with a much faster f/1.8-2.8 maximum aperture, 4K video, a super-fast burst mode and a body genuinely small enough to slip into a trouser pocket. If you really want a bigger sensor, keep reading, but the G5 X Mark II does give you a very rounded set of specs for a pocket camera.

If you like the Canon G1 X III quality but not the price, get this

The trouble with big sensors is that you need big lenses to go with them, so there goes any kind of pocketability. Usually. But Panasonic has really hit the sweet spot with the Panasonic LX100 II. It combines a Micro Four Thirds sensor that's not much smaller than the ASP-C sensors in mode DSLRs, with a miniaturised lens assembly that powers down into a camera body slim enough to carry around anywhere. The LX100 II is a brand new version of the original LX100, which was, admittedly, starting to show its age. The new model has a 16-megapixel ‘multi-aspect’ sensor, which means you can use its native 4:3 aspect ratio, the 3:2 ratio used by most DSLRs and mirrorless models, or a 16:9 ‘wide’ format without cropping the image and losing pixels. With an external shutter speed dial, lens aperture ring and aspect ratio switch, the LX100 II is a dream compact camera for enthusiasts and experts.

A cheaper alternative to the Panasonic LX100 Mark II

The Panasonic LX15, which goes by the name LX10 in some territories, doesn't have a viewfinder, and it also has a 1-inch 20-megapixel sensor rather than the larger Micro Four Thirds sensor in the LX 100 II. The smaller sensor and lack of a built-in EVF might put some people off, and the smooth finish to the body doesn't make for the firmest handgrip, but the responsive touchscreen is terrific, the  dual control rings provide a very pleasing user experience, and the 24-72mm has one of the widest aperture settings around, courtesy of its f/1.4 to f/2.8 aperture range. Overall, this neat little snapper has the near-perfect balance of features, performance and pricing. It's small enough for your pocket but powerful enough for some serious photography.

The Sony Cyber-shot RX100 VII is mad on any number of levels. The plus points include its impressive 24-200mm zoom range in such a small camera, its pop-up electronic viewfinder in a camera that looks too small to have one, and its good-sized 1-inch 20.1MP sensor. It can also shoot 4K video, which is good, but then it all starts to get quite strange. This camera has a super-high-tech 357-point phase-detection autofocus system, a 20fps continuous shooting speed (up to 90fps in Single Burst mode), and 0.02sec AF response with Real-Time AF tracking. It also has Sony's S-Log2 and S-Log3 video modes for high-end video recording and color grading – all in a pocket-sized camera. All this power is great, and deeply impressive, but it pushes up the price considerable and to some (well, us) might seem out of place on a camera like this.

If you like the look of the RX 100 VII but not the price, this is better

Sony has a strategy of keeping older versions of its cameras on sale for a long time, with prices that keep on going down, so although the RX100 III is four versions behind the brand new RX100 VII, its specs are still pretty good even by today's standards. It's the first RX100 model to get a built-in pop-up electronic viewfinder, its flip-up-and-over rear screen is ideal for selfies and vlogging, and while its lens has a shorter 24-70mm equivalent zoom range than the newer camera, it has a faster f/1.8-2.8 maximum aperture across that range. If you don't need the RX100 VII's high-powered AF, pro-level 4K video features and super-fast continuous shooting, the RX100 III is ideal. It has the small form factor of the RX100 series and the same good-quality 1-inch sensor, but without any of the musclebound madness of the later models.

If you can live without a zoom (and much of your money), get this

Leica cameras tend to divide opinions quite strongly. They are fearsomely expensive, built to traditional designs and standards that many consider dated or irrelevant, and rarely match modern rivals for features and technologies. But there's more to cameras than numbers on a spreadsheet, and everything about the Leica Q2 is superb, from its full frame image quality with its new 47 megapixel sensor,  through to its Leica-made Summilux lens and its stripped, down minimalist design. Using a Leica isn't just about the images, it's about the experience too – so you just need to decide if the experience is worth all this money!

A retro design, unique hybrid viewfinder and large (for a compact) APS-C sensor made the original Fujifilm FinePix X100 one of the most desirable fixed-lens digital cameras at the time of its 2011 release. The first ‘X’ camera was superseded by the X100S and the X100T, each of which fine-tuned the formula – but it’s the fourth iteration, the Fujifilm X100F, where everything has come together beautifully. A new control layout, a third-generation 24.3MP X-Trans CMOS III sensor (with no low-pass filter), an expanded sensitivity range and improved AF might appear more evolution than revolution, but it’s the combination of these refinements that delivers a step-change in performance. The aforementioned sensor, fixed 35mm-equivalent f/2 lens, X-Processor Pro engine and Film Simulation modes combine to deliver super images – and taking them brings just as much pleasure. Make no mistake, it’s not cheap, but the X100F is a magnificent compact camera for photography enthusiasts.

The Fujifilm XF10 is less than half the price of the X100F above, but it's definitely more than half the camera. You don't get Fujifilm's fancy hybrid optical/electronic viewfinder here, so all your shots have to be composed on the fixed rear screen, but you do get a top-quality 24.2-megapixel sensor, a very good 28mm f/2.8 fixed focal length lens and a very attractively-designed little camera. In fact, this camera is so slim you can easily slide it into a jacket pocket and it's this, as well as the relatively low price, that makes it so appealing for quality conscious photographers who don't want to speed a lot of money.

It's the latest in a classic line, but it's starting to show its age

The Ricoh GR has a long history, both as a premium-quality compact 35mm film camera and now as a digital model. However, its specs and its performance are now looking a little behind the curve compared to its latest rivals. GR fans, or GRists as Ricoh call them, will love this update of an iconic camera. But in the world of multi-lens camera phones the wider appeal of this fixed lens compact will probably be limited. This is a beautiful-sized APS-C compact, ideal for carrying around in the pocket, and for discrete street photography. But this is sold at a luxury price that is no longer justified by the the build quality or the feature set.