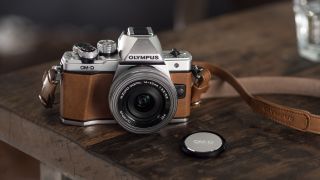 It features a 16.1MP Micro Four Thirds sensor at its heart, the size of which means it offers double the 35mm-equivalent focal length of any lens attached. So, a 14mm optic becomes the equivalent of 28mm lens, for example, while a 50mm lens provides an effective 100mm, and so on.

The E-M10 Mark II’s magnesium alloy body comes in either retro silver trim or completely black, with integrated Wi-Fi for sharing images to a smartphone or similar device.

Its relatively compact size makes it ideal for travel or reportage photographers who want to take advantage of its compatibility with the forty-plus lenses in the Micro Four Thirds range.

The camera shoots Full HD video (at up to 60fps), and there are attention-grabbing 4K time-lapse and slow-motion video capture options. Burst capture speed has been cranked up a notch from the model it updates, from 8fps to 8.5fps, while five-axis image stabilisation ensures that both video and stills are protected against camera shake, no matter what lens is affixed.

Typically for Olympus, the tilting back-plate LCD on the OM-D E-M10 Mark II is also a touchscreen, which means that a finger tap on a subject will direct the camera’s point of focus to it and subsequently fire off a shot. For those who like to shoot with the camera held up to their eye, meanwhile, there’s an OLED electronic viewfinder that has a 2.36million dot resolution – almost double the resolution of its predecessor – and a 100% field of view.

Another regular feature in the OM-D range that's made its way here is the wide degree of creative control built in via digital effects filters. Here, this is split between fourteen Art Filters and nine Art Effects, which saves you having to process your images into different styles afterwards.

In short, the OM-D E-M10 Mark II is a camera with ideas that stretch beyond its diminutive dimensions. If you like the sound of the above Mark II model, you may also want to examine the more recently introduced Mark III version.

This mini mirrorless model packs plenty into its diminutive shell