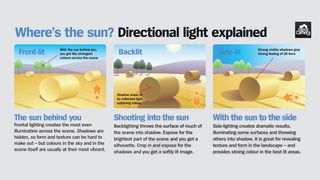 It's common to hear talk of landscape photographers waking up early to get the softest and most flattering light, but the position of the sun also has a significant say on the end result.

Shoot with the sun behind you and you'll see a very different result to one where it's to the side of you, or directly ahead of you. There's no right or wrong position for this to be in – it depends, after all, on the result you're after – but knowledge of what happens as it changes will help you to plan so you can be in the right place at the right time.

Shooting with the sun behind you

Shoot with the sun directly behind you, and you'll find illumination to be even across the scene. The sky is more likely to be balanced from one side to the other, and this is important when shooting a landscape with a wide-angle lens, particularly when using a polariser to give depth to the sky, as any gradual changes across the scene are likely to be more noticeable.

Read more: Why do small apertures have large f-numbers?

This option is a favourite of landscape photographers, and is particularly suitable in scenes where there aren't too many significant foreground details. Here, you may prefer one of the other options that will help to accentuate the form of such elements.

Shooting into the sun

Shooting with the sun directly ahead of you isn't suitable for every scene, particularly as your camera will naturally be inclined to underexpose many details. Adjusting your exposure will help to bring these back up, but you risk losing too much detail in the sky.

That said, it's great if you want to render darker subjects as a silhouette, and so it's particularly useful when shooting in black and white, with dominant subjects contrasting against their background.

Shooting with the sun to the side

Side lighting is great when used to its full potential. Not only can it help give your subjects definition, but longer shadows of trees and other elements stretching over the scene can look very dramatic.

Read more: Why do we have better light for photography earlier and later in the day, rather than at midday?

It's particularly effective in scenes where only a small portion of a subject is lit well, and the rest is rendered as a shadow. The fact that you're more likely to use this very early in the day, or later as the sun is setting, is also great as you'll have a softer light to work with.

Make sure to check back for more great cheat sheets!