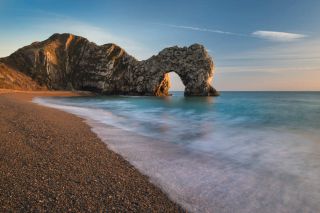 Do you need a better camera if you're going to take better photographs? No, you need an alarm clock.

Most of the dramatic landscape photographs you see online, in magazines and in books were taken either early in the morning or late in the day. In fact, some magazine editors insist on it, and rarely use anything shot at other times of day.

You may have heard about photographers chasing both the golden hour and the blue hour, and how getting up before dawn, and timing visits to coincide with dusk, is so important in getting the best possible shots.

But why? What's so special about what time of day you take photographs?

Why is the position of the sun so important?

In the middle of the day, when the sun is overhead – or, at least, as high in the sky as it gets – the light from our nearest star is at its strongest. Colours are washed out and shadows are short.

When it's low in the sky, its light is warmer and less intense, and it throws long shadows. Just before sunset or after sunrise is twilight, when there is no direct sunlight because the sun is below the horizon. However, there is still a still light in the atmosphere, and everything takes on a blue hue.

What affects the position of the sun?

Where the sun is in the sky is incredibly important, for the art of photography is about little else than how to collect light.

The sun's position is explained by the rotation of our planet, although it's not quite that simple, as the Earth rotates on a 23.5º tilted axis with respect to the sun, which explains the ever-changing sunrise and sunset times as the seasons wax and wane. That's why the sun's exact rising and setting points move back and forth along the horizon each day.

The effect of all this is an ever-changing length of day and night, so if you're planning a shoot you should check the exact sunrise and sunset times for your intended location. There's no need to get an exact time for somewhere that's 10 miles away, but any more than that and it starts to make a difference. Sunrise and sunset in London, for example, is about 12 minutes earlier than in Cardiff, which is around 130 miles west of the capital.

Websites and apps like TimeAndDate.com, Sunrise Sunset Times, Sunrise Sunset Lite, The Photographer Ephemeris, PhotoPills should always be consulted before planning anything.

How does light travel and scatter in the Earth's atmosphere?

The exact position of the sun in the sky is important because of the way our planet handles its light. Sunlight is radiation, and the angle it enters Earth's atmosphere ultimately determines how much radiation – as light – reaches your camera's sensor.

Light travels in waves, with the visible spectrum of sunlight stretching from violet and blue through green and yellow to orange and red (yes, a rainbow!). Blue has the shortest wavelength, and red the longest. Blue light hits all the molecules and particles in Earth's atmosphere, and is deflected in all directions, but only by the relatively thin atmosphere directly above.

There's not much violet light in sunlight, so the sky looks blue. As the sun appears to move closer to the horizon, that sunlight reaching your camera is travelling through a lot more atmosphere compared to when it was overhead. The blue light is being deflected, and re-deflected, by a lot more particles and molecules. That leaves the orange and red light to travel through and become more visible.

What does all of this mean for images?

Where the sun is in the sky determines everything about the quality of light on offer.

In the middle of the day, there's a lot of contrast, so exposed areas of, say, a canyon wall look bleached and bright, while sheltered areas are black. It's difficult to expose for both, so you need to make sure the bright area is not overexposed, and try to wrench some detail from shadowed areas. However, shadows are short, which can give everything a flat look.

This is not a particularly good time to take photographs, so if you're really serious about landscape photography, the middle of the day is good only for (a) scouting out shots for later in the day or for the following early morning, or (b) resting after an early start.

As the sun sinks in late afternoon or early evening, the light briefly turns golden. If the sky is free of clouds, it's the perfect time for portrait photography since your subject can be lit side-on, or even straight-on, by orangey sunlight. Mountains are illuminated in soft light, but the low position of the sun creates pockets of shadows. It also means long shadows across landscapes and trailing behind, to the side, or in front of people.

As well as being interesting in a composition, shadows instantly give the viewer a sense of time. As this golden hour fades, get ready to eek out as much light as possible using long exposures, higher ISO settings and large f-numbers. During this time can you get a milky effect on waterfalls, rivers and seascapes without ND filters. Exact timings differ dramatically according to the time of year and your location on Earth, but the landscape photographer's day – clear skies allowing – follows a distinct pattern that then goes into reverse:

Of course, you can take great photographs of other kinds at any time of day. But your favourite landscape and outdoor portrait photographs? They'll most likely always be blue or golden.

Read more: How to photograph during the golden hour