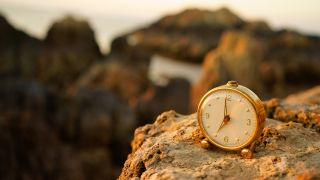 When is the best time to take photos? That's a tough question to answer, but a good candidate is certainly the golden hour, a period of time during which the sun's light is soft, yet warm and cast long shadows.

Far away from the harsh light of the midday sun, the golden hour is when landscape and portrait photographers often do their best work. You also get two bites of the cherry with the golden hour, since it comes just after sunrise and just before sunset. Here's what the golden hour is and why it produces such a warm quality of light, and how you can use it to improve your photography.

What is the golden hour?

The golden hour comes with both the dawn and dusk, and refers to the first light and last light of each day. From this point on, therefore, we'll refer to these as the golden hours.

These are magical times to take photographs since the Sun's rays of light travel through a lot of the Earth's atmosphere. As they do so, they travel through much more dust, more water, and more air molecules, which soak up more photons. Less sunlight gets through, which is why you can look at a setting sun without being blinded.

It's also why longer shutter speeds are possible during the golden hours, which allows photographers to be at their most creative. The thicker atmosphere scatters the blue light, which has a very short wavelength, so warmer colours at the red end of the spectrum tend to dominate. It's why a setting sun is an orangey-red colour.

However, just as important for photography are the long shadows created by the low angle of the sun during the golden hours. They not only allow creative compositions, but their mere presence effortlessly creates a sense of time – or is it timelessness? – in photographs.

Landscape and architecture photography in the golden hours

Photos of nature and of buildings can really benefit from the soft light of the golden hours. The dynamic range is narrower, which means it's possible to set an exposure that captures more details in both shadows and highlights in a scene. The sky is more colourful around buildings, and changing fast before your eyes.

For landscapes, however, the best reason for heading out during the golden hours is that you can use longer shutter speeds to capture both more detail either in a still scene (which may require setting the aperture to f/16 or thereabouts), or to capture motion as a milky blur (waterfalls, for example, or tides coming in and out on a beach). Either way, you'll be surprised how much your shutter speeds have to vary for the same shot as the sun either climbs or sinks.

Portrait photography in the golden hours

Portrait photographers also use the golden hour, not only because the warm tones give a golden hue to their subjects, but because their subjects can have both sunlight on their faces without squinting, and shadows without that part of their face being completely dark. Whereas direct midday sun often means using fill flash to find some detail in shadowed areas of a face, it's the golden hour it's all natural.

The golden hour also helps with composition; a photo containing someone and their shadow immediately has depth. Furthermore, if you have the last rays of the setting sun hitting your subjects from the side or back, they can have a shimmer or halo around them that catches the eye.

It's the same with a flare shot, which is only really possible when the sun is low on the horizon, both compositionally and because of the sun's lower intensity. All this is why savvy wedding photographers tend to hang around long after the ceremony.

How does the weather affect the golden hour?

As with all photography, even the best preparation can be ruined by bad weather. However, it's far less clear-cut than that, because the presence of clouds can combine with a setting or rising sun to produce a beautiful sky. If you're lucky enough to see such a thing, start looking for reflections in lakes and even puddles. However, the presence of cloud on the horizon will, of course, rule out direct shots of the sun at the point of sunrise or sunset.

How long does the golden hour last?

Sadly, it's not always an hour. Exactly how long it lasts depends on exactly where you are on the planet, and when.

Your latitude and longitude, together with the time of year, will determine the exact transit of the Sun through the sky, and its angle as it appears to rise and set. If you're near the equator, golden hour will be very short indeed, with sunset quickly followed by complete darkness.

However, the further north or south you go from the equator, the longer the golden hour will linger; if you're near the Arctic Circle, in Scandinavia, Canada, Alaska or northern Russia, the golden hour can last for well over an hour in spring and autumn.

Are there any sky phenomena unique to golden hour?

As well as a general softening of the light, together with the chance to create striking silhouettes and play with long shadows, there are some environmental phenomena that only occur during this short period. The three major ones are sun dogs (sunlight refracting off cirrus clouds causing a 'false sun' each side of a setting sun), halos (around the Sun, caused by ice crystals) and light pillars (a column of light above the sun, also caused by ice crystals), and these can occasionally be seen during winter. Normally you won't see any of these, but keep an eye out.

How to find the golden hour

If you're always looking for great light, the golden hour is what you're after – and there are plenty of websites and apps that will find it for you.

Perhaps the simplest website of them all is Golden Hour, which automatically identifies exactly where you are in the world and calculates exactly when the golden hour will start for you that evening. It's also available as an app for the iPhone and iPad (pictured below).

However impressive that is, the GoldenHour.One app is better for planning a shoot. As well as plotting exactly when the golden hour (and the blue hour) begins and ends for any location, it adds a compass mode for finding the exact direction of sunlight. That means you can calculate when your ideal shot will be possible, and save it in your calendar. It also includes weather data.

Either way, the golden hours are not to be underestimated. If you really want your outdoor photos to stand out, you need to be in position to take full advantage of these special times of day.