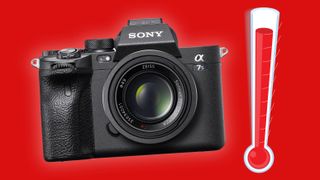 The new Sony A7S III rolled out amid a great deal of fanfare thanks to its raft of impressive specs, but its biggest statement was that it can record 4K 60p for over an hour without overheating – double that of the Canon EOS R5.

However, early tests by reviewers in the United States reveal that the Sony A7S III does in fact suffer from more severe overheating issues in 4K 60p – and, in certain circumstances, it actually overheats even faster than the Canon EOS R5.

On paper, it looked like a Sony had absolutely routed Canon. The R5 can only shoot 4K 60p for 35 minutes (or 25, if oversampled) before shutting down, while Sony claimed that the A7S III can manage in excess of 60 minutes. (Standard recording at 4K 30p causes no heating issues on either camera).

Indoors, both numbers hold true. YouTuber Dan Watson was able to record for 90 minutes on the Sony and 25 minutes on the Canon. When he shot with both cameras outdoors, though, in the direct Florida sunshine, the A7S III actually overheated first – shutting off at 23 minutes while the R5 made it to 33.

"When I went outside in the crazy Florida heat, things took a kind of unexpected turn here. The Sony was consistently measuring about five degrees hotter than my Canon, and it actually shut off at about 23 minutes where my Canon went to about 32, 33 in 4K 60."

After the comments section went apoplectic at his methodology, Watson repeated the experiment with a greater emphasis on test conditions – this time both cameras fared a little better, but again the Sony tapped out at 29 minutes while the Canon soldiered on to 34.

Fellow YouTuber Hugh Brownstone achieved near identical results in direct sunlight, even without the same intense heat as the Florida sun.

As we've noted before, these 4K overheating issues are nothing new – they've just come back to the fore, because the Canon EOS R5 is such a high profile camera. The Fujifilm X-T4 overheats in 4K, as does the Canon PowerShots G7 X Mark III, and infamously Sony's earlier generations of Alpha cameras got so hot that they were physically uncomfortable to hold.

If you want the best 4K cameras that don't overheat, look to the Panasonic GH5S and Panasonic S1H, which will shoot in the sun until the cows come home. However, in the current Reddit battles between the A7S III and R5, this latest news is sobering for many who thought Sony had a magic bullet.