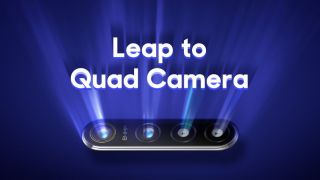 The company will simultaneously showcase its move into quad camera technology, making it a double-whammy announcement of the world's first quad-camera phone, widely expected to be the new flagship handset.

As GSM Arena points out, Realme already produces dual-camera phones in the form of its 3 series and the Realme X. In both cases, one of the cameras features a depth-detecting time of flight sensor.

It stands to reason, therefore, that one of the four sensors on Realme's new 64MP quad-camera phone will similarly be a time of flight affair. And, since the company doesn't make any triple-camera handsets, this new model will indeed be a big leap for the company.

In addition to the depth-detecting camera – which facilitates software-driven effects like background-blurring portrait modes with artificial depth of field – the other two non-primary units are almost certain to feature a wide-angle and a telephoto lens.

The race to produce a 64-megapixel camera phone has been a hotly run one. While Samsung announced the first 64MP camera phone sensor back in May, it appeared that Xaomi would be the first company to actually bring it to market.

However, when Redmi released the first 64MP camera phone picture (of a cat, no less), it looked like it may be in pole position to win the race. And now Realme has come out of nowhere to steal the spotlight.

Stay tuned to Digital Camera World as we bring you the latest on Realme's new handset – and in the upcoming camera phone megapixel battleground.