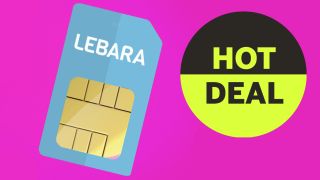 You can't get much for a fiver nowadays, so this makes this SIM only deal nothing short of amazing. Lebara's £5 per month SIM only plan is special for a number of reasons. For starters, it gives enough basic allowance to keep many mobile phone users in calls and data without the need for further top up. For your fiver, you get 2GB of 4G data, 1000 minutes of calls and 1000 texts. All this on a 30-day rolling contract, so you can keep using this for as long as it actually suits you.

But what makes this deal especially tempting are the add-ons. Lebara also throw in 100 minute to international calls to 41 of the most popular call destinations around around the world into the monthly free allocation. This makes it particularly useful for those with family and friends are not in the UK – allowing you to keep in touch with them, even when you are not on wifi, without extra charges.

A great low-cost SIM only deal that gives you a decent dollop of data, calls and texts for your fiver. But also throws in free calls to other Lebara users in the UK, and most temptingly gives you 100 free minutes of calls to 41 countries around the world.

Furthermore, you get unlimited calls and texts to anyone else in the UK that is using Lebara as their mobile network.