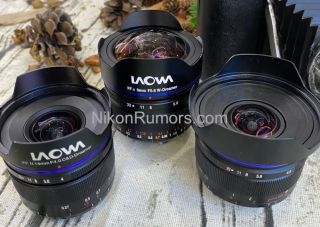 Laowa has already revealed the development of three new wide-angle prime lenses to fit the Leica M rangefinder mount, which is news in itself, but now we hear via Photo Rumors that these new lenses will also be made in Nikon Z, Sony E, Leica M, and L mounts too. And one of these lenses is an astonishing 9mm f/5.6 rectilinear wide-angle – NOT a fisheye, in other words.

Until now, the widest lens we've ever seen is the Samyang XP 10mm f/3.5. To put this in (very wide) perspective, in full frame camera terms, a 14mm lens is normally considered a super-wide lens, and 12mm is an ultra-wide. Canon's exceptional EF 11-24mm f4L USM zoom is a little wider still, but against these, the planned Laowa 9mm f/5.6 is simply off the scale.

The news is being widely distributed on rumor sites and Leica Rumors has published the following hands on video on its Instagram feed.

One of the new #VenusOptics #Laowa lenses for #Leica M-mount LeicaRumors.com 🔴

The Laowa 9mm f/5.6 is just one of three new prime lenses coming from Laowa. Initially, these were announced for the Leica M (rangefinder) lens mount, but we now hear that these lenses will also be made available in Nikon Z, Sony FE and Panasonic/Leica/Sigma L mount versions. The other lenses in this trio of Laowa wide-angles are an 11mm f/4.5 and a 14mm f/4.

Sony is the brand with the widest mirrorless lens range right now, but even Sony doesn't have lenses quite like the new Laowa offerings. Nikon Z and L mount cameras currently don't have any wide primes in this range.

Even Leica fans might be tempted by the M mount versions. Leica's audience is pretty limited due to the cost of its cameras, and if you can afford $8,300 for the new Leica M10 Monochrom, you're probably not very interested in low-cost lenses... but the Laowa 9mm f/5.6 goes wider than anything else out there. We've used the Laowa 9mm f/2.8 Zero-D APS-C lens and found it pretty exceptional, so we can't wait to try the 9mm f/5.6.

Details are scarce right now, but from the pictures we've seen the new lenses will have the compact form factor we're used to seeing from Laowa. The manual focus design means less space is needed for complex AF actuators and moving focus elements.

We'll bring more news on these lenses, including prices hopefully, just as soon as we get it.