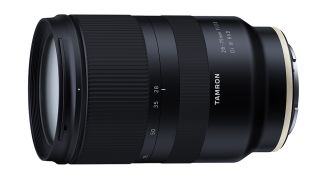 Tamron's 28-75mm F/2.8 Di III RXD lens, which was one of two lenses subject to the company's recent teaser campaign, has finally been confirmed by the company.

Development of the lens was announced back in February, although only a handful of specs were released at the time. Now, the company has officially confirmed its release, and also stated that that the optic will start shipping at the end of May, with an SRP of $800 in the US.

The lens has been designed for full-frame Sony E-mount cameras, such as the recent A7 III and the A9. Thanks to its combination of a standard zoom range, f/2.8 constant maximum aperture and a reasonable asking price, the optic is bound to interest Sony Alpha users that can't quite stretch to the four-figure asking price of Sony's closest equivalent lens, the FE 24-70mm f/2.8 GM.

The optic, which weighs just 550g, has an optical construction that sees 15 elements spread across 12 groups, with a glass-molded aspherical element among them. It also has the honour of being the first lens to feature a new RXD stepping motor, which, the company claims, has been designed to operate exceedingly quietly, a move that will no doubt interest those intending to use it for video recording.

Prices for other territories have not been confirmed yet. In the meantime, head over to Tamron's site for further details.

Read more: 23 things you should check when buying a new lens