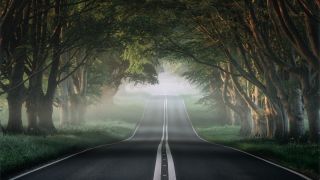 Wex Photo Video has officially revealed the winner and two runners-up in its #WexMondays Photographer of the Year 2020 competition - and it's Andi Campbell's beautiful landscape photography that's scooped the top prize.

The #WexMondays competition was established in 2012 and runs a little differently to most photography competitions. Rather than having to submit your images once a year, you can enter via the hashtag #WexMondays on Twitter each week. Approximately 15,000 images from photographers across the UK were submitted over the past 12 months, giving Campbell's winning landscape photography plenty of competition for the £1,500 prize.

Based in Devon, Andi Campbell has always been interested in photography, but only started pursuing it actively when he acquired his first interchangeable lens mirrorless camera six years ago. From that point on, he fell in love with the art of landscape photography and has honed his skills through online resources.

Campbell commented, "I entered Wex Mondays after getting the bug and winning in one of the weeks last year. I was introduced to it through the amazing photography community on Twitter, and from knowing others who have been successful in the past. The hardest part of the competition was finding something new and original to enter each week, regardless of the weather conditions or where I was able to photograph. Winning means the world to me."

Thanks to his winning landscape photography shots, Andi Campbell has scored himself the prestigious title of Wex Photographer of the Year and £1,500 of Wex Photo Video vouchers.

In second place, winning £500 in vouchers, is Kent-based photographer Dan Portch. His passion for photography began after he bought a DSLR after the birth of his first child. In addition to capturing photos of his young children, Dan also enjoys shooting on location in Devon. This has lead him to create beautiful coastal landscapes and colorful architectural shots.

For your best shot of winning next year's Wex Photographer of the Year competition, check out the rules below.

"Entrants are invited to share their best shot from the previous seven days on a subject matter of their choice, tagging @wextweets and using the hashtag #WexMondays. Every week, one winner, two runners-up and seven other shortlisted shots are selected by the Wex Photo Video judging panel based on technique and creativity, and allocated points on the #WexMondays leader board. The top three photographers with the most points accrued throughout the year are presented with the first, second and third place prizes in the Wex Photographer of the Year competition."

A collection of the 46 winning images from the weekly #WexMondays competition will be exhibited at the Wex Photo Video Gallery from 16 to 31 January 2020. In the mean time, you can peruse the images from the winner and runners-up below.

Best camera for beginners in 2019: we help you choose the right camera
Best camera backpacks in 2019: carry camera gear, laptops and more
Best Fujifilm cameras in 2019