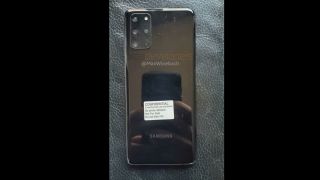 The specs, posted by GSM Arena, confirm what had previously been reported about the three Samsung Galaxy S20 cameras, which have been revealed to boast 8K and 4K 60fps video for the S20+ model at least, along with a slew of new photo and video modes detailed in the original story below.

ORIGINAL STORY (14 JAN): The floodgates have been flung wide open on the Samsung Galaxy S20 ahead of its 11 February announcement, with leaked images of the phone as well as its specs confirming that this could be one of the most exciting launches of the year.

With 4 cameras and the ability to shoot 8K video at 30 frames per second, the Samsung Galaxy S20 already looks set to be one of the best camera phones of 2020. Though of course, 11 February and the Samsung Galaxy Unpacked event will bring us a whole family of S20s rather than a single model.

Formerly referred to as the Galaxy S11, Samsung has changed its naming convention for the product line – possibly to coincide with the year of release (meaning that the 2021 phone will be called the Galaxy S21). Either way, according to uber-leaker Ice Universe, the S11e will become the S20, the S11 becomes the Samsung Galaxy S20+, and the S11+ will be the Samsung Galaxy S20 Ultra – though the latter still has a question mark next to it, so the "Ultra" may not be final.

Most excitingly, though, XDA Developers shared leaked images of the S20+. These reveal that the back of the phone will have a camera array with six modules – four cameras, a flash unit and what is said to be a microphone perforation.

According to the site's source, the front Infinity-O display is much less curved than before and "felt flat – almost similar to the Pixel 2 XL", with Samsung seeming to have opted for 2.5D glass instead of its standard curved glass.

The website then went a step further and shared specifications for the S20+ that the leaker had access to. Its main camera features a currently unreleased Sony IMX 555 12MP 1.8μm sensor, supported by a 64MP sensor whose function is not yet clear. However, what definitely isn't present on the leaked phone is a macro lens or the much vaunted 108MP sensor. This would suggest that the top tier Samsung Galaxy S20 Ultra will be the only camera in the lineup to feature 108MP imaging.

The S20+ is capable of recording 8K video at a locked 30fps (so there's no option for 24fps), with 4K 60fps featuring video stabilization for both its front and rear cameras – though neither mode supports HDR video.

The Samsung Galaxy S20+ also features some brand new shooting features, such as Smart Selfie Angle (which automatically switches to wide-angle when it detects more than two people in the frame), Single Take photos (which enables you to pan around a scene "as the phone automatically takes pictures and videos") and Pro Video (which "will basically let you use the pro mode settings while taking videos").

The leaks are only going to increase as we get closer and closer to Samsung Galaxy Unpacked. We can't wait to see what other secrets the S20 Ultra has in store in addition to the headline 108-megapixel sensor…