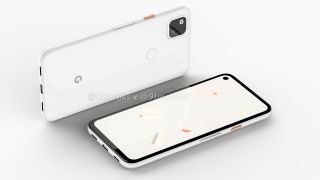 The Pixel 4A looks like it could introduce the Google Pixel range of camera phones to 5G mobile data speeds, according to recent detective work by the folks at XDA Developers. After dissecting a Pixel 4 firmware dump, they were able to discern two chipsets that would be used in the 4A-series – sensational sleuthing. The first, a Qualcomm Snapdragon 765, which will feature Qualcomm’s 5G modem, and the second a Snapdragon 730, which won’t.

This comes after leaked renders of the devices from OnLeaks and 91 Mobiles that showcase the design of the new Pixels, complete with Honor 20-style punch hole notches and a square camera surround at the back. While the Pixel 3A introduced the concept of bringing Pixel quality cameras to the masses, the Pixel 4A doesn’t look set to mirror the camera of the Pixel 4 like-for-like. Instead of the Pixel 4’s dual-camera, based on these leaks, it looks like the 4A has only got the flagship’s primary camera, ditching the telephoto lens.

A great primary camera isn’t to be sniffed at, and with any luck, Google will also load up its upcoming midrange pixels with bigger batteries than it did the Pixel 4. This would make them great phones across the board rather than just great camera phones.

We’re expecting both 4G and 5G versions of the Pixel 4A to launch at Google I/O on the 12-14 May, given the fact that this event was the platform during which Google announced the Pixel 3A last year.