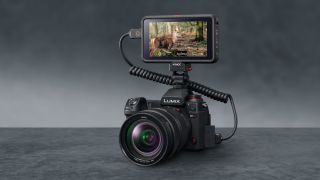 UPDATE: Panasonic has issued a statement that the promised firmware has been delayed due to technical issues. The statement reads "The firmware updates that enable the much-anticipated RAW over HDMI for LUMIX S1H and Atomos Ninja V have unfortunately been slightly delayed from the original 25th May release schedule. An unforeseen technical issue has come to light in the final rounds of beta testing that needs rectification prior to shipping. Both Panasonic and Atomos are working together to complete the development as soon as possible. This is to ensure the highest possible level of RAW recording is delivered. We apologise for the inconvenience this delay causes."

ORIGINAL STORY: The Panasonic Lumix S1H about to get a free firmware update which enables raw video capture via HDMI and the Atomos Ninja V external recorder/monitor.

The Lumix S1H is the third member of the full frame mirrorless Lumix S family, and designed specifically for cinema-quality video with a bigger body for heat dissipation and a dedicated cinema-orientated interface. It easily qualifies as one of the best 4K cameras for filmmaking (it actually captures in 6K), but many were surprised that such a powerful cinema camera didn't offer raw video capture.

It still doesn't, internally at least, but Panasonic is now about to deliver a solution, with the help of Atomos, which makes some of the best on camera monitors and recorders for videographers.

With a free firmware update due for release on May 25 2020, the Lumix S1H will be able to hook up to an Atomos Ninja V HDR monitor-recorder via HDMI 2.0, to record 5.9K video at 30p or 4K video at up to 60p in the Apple ProRes RAW format.

It's not the first time this has been done. Atomos has already co-developed the same solution with Nikon to allow the Nikon Z 6 and Z 7 to capture raw video.

It might sound like an expensive and inconvenient solution, but in fact it's common practice for cinematographers and high-end videographers to use external recorders, and it is typical for these devices to be able to capture video at higher quality settings than the camera can record internally.

Support for RAW HDMI output is not the only improvement in this firmware update. It will bring support for a Super35 format 4:3 anamorphic mode, where ultra-wide scenes are captured and stored horizontally compressed and expanded again for playback. It will also be possible to select V-Log or Rec.709 modes during RAW output, and display shooting assist functions including WFM (Wave Form Monitor), Vector Scope, Luminance Spot Meter and Zebra Pattern.

The update brings a number of ergonomic and operational improvements and tackles a few bugs too. Panasonic says, "There were cases where colour banding appeared in 4:2:0/10-bit video recording in some situations. This bug has been minimised." In addition, "There were cases where the REC RUN time code did not count up when the video was not recorded on an SD Memory Card but was recorded on an external device over HDMI. This bug has been fixed." Another issue with freezing during 400Mbps recording in certain conditions has been "improved", and a fault with aperture control on some non-Panasonic L-mount lenses has been fixed.

This is a significant update for the Lumix S1H to keep it competitive in a fast-changing market. The just-revealed specifications for the Canon EOS R5 show how rapidly video capture technology is advancing.