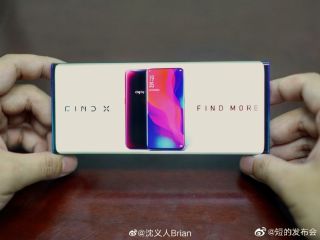 Oppo has unveiled a brand new 'waterfall screen', featuring extreme 88-degree curved edges that is free of bezels as well as buttons, which is expected to debut with the Oppo Find X2 camera phone in September.

It has been speculated that the Oppo Find X2 might also be the ideal device to showcase the company's highly anticipated under-display camera.

The prototype camera phone with waterfall screen was shown off by Oppo VP Brian Shen on his personal Weibo account.

The 88-degree sloping sides enable the phone to do away with both the bezels and the buttons traditionally featured in the edges of handsets, and provide an arguably unprecedented screen-to-body ration, with the display wrapping almost completely around the sides.

Notably, the phone doesn't have a notch or punch-hole for a rear-facing selfie camera. This is true to the design of the original Oppo Find X, which features a 'stealth 3D camera', a full-width array (rather than a smaller pop-up camera) that slides up from the rear of the device's housing.

However, it has been suggested that the Oppo Find X2 could be used to simultaneously introduce the manufacturer's eagerly awaited under-display camera – about which Shen previously stated, "For those seeking the perfect, notchless smartphone screen experience – prepare to be amazed".

Smartphone rumor site Digit.in was among those believing that the waterfall screen and under-display camera could both arrive in the same unit, possibly arriving as soon as September.

"The prototype that Oppo showcased doesn’t have a front camera but it’s likely that the final version will integrate the under-display camera tech as well," wrote the outlet. "The tech is expected to debut in the second-generation Oppo Find X, which could be launched in September at IFA in Berlin."

With the Samsung Galaxy Fold just announced for a September relaunch, it will be interesting to see how the two screen-maximizing technologies are received at IFA – the consumer electronics trade show taking place from 6-11 September.