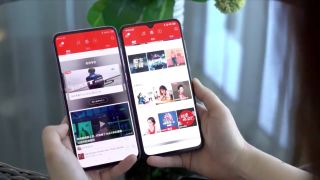 Camera phone technology may be about to change forever, thanks to the latest innovation that's been revealed by Oppo and Xiaomi: under-display cameras.

"For those seeking the perfect, notchless smartphone screen experience – prepare to be amazed," posted Oppo on Twitter, sharing a Weibo video by VP Brian Shen. "You are taking a very first look at our under-display selfie camera technology."

The video shows a prototype Oppo handset flat on a table, with a full-coverage screen and no visible notch or punch-hole camera. When the camera app is launched, a camera embedded beneath the phone's screen becomes active – though it only showed an image of the ceiling and a finger passing in front of the lens, leading to some scepticism over the quality (and even authenticity).

"At this stage, it's difficult for under-display cameras to match the same results as normal cameras, there's bound to be some loss in optical quality," Shen said in a follow-up Weibo post, as reported by Engadget. "But, no new technology jumps to perfection right away."

For those seeking the perfect, notchless smartphone screen experience – prepare to be amazed. 📲You are taking a very first look at our under-display selfie camera technology. RT! 🤯 pic.twitter.com/FrqB6RiJaYJune 3, 2019

Not to be outdone, Xiamoi followed up with a video of its own under-display camera – this time with a much more impactful and impressive demonstration of the technology.

"Do you want a sneak peek at the future?" the company tweeted, resharing president Lin Bin's Weibo video (recorded back in May) with curiously reciprocal timing. "Here you go...introducing you to Under-Display Camera technology!"

Unlike Oppo's laggy, low-res demo of a ceiling and a finger, the Xiaomi video depicts a user wielding a pair of Xiaomi Mi 9s – one a conventional model with a notch, the other a prototype with the concealed camera.

After scrolling through screens and activity the camera app, the user then takes a selfie with the phone – suggesting that Xiaomi's tech is in a far more advanced stage than Oppo's.

Do you want a sneak peek at the future? Here you go...introducing you to Under-Display Camera technology!#Xiaomi #InnovationForEveryone pic.twitter.com/d2HL6FHkh1June 3, 2019

Xiaomi says that the cathode and anode panels of the screen are transparent in the area around the camera, ensuring that light can be received by the lens and sensor.

According to The Phone Talks, Xiaomi filed a patent for photosensitive screen function in November last year that uses two separate screen display portions to alternately facilitate the passage of light to the camera.

However, should it perform as well as it appears in Xiaomi's video, it looks like the world of notches, punch-holes, pop-up cameras, and even wraparound screens could be made redundant.