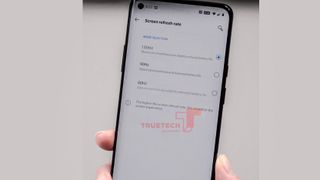 The OnePlus 7T Pro was a cracking phone, though it's design was virtually identical to that of the 7 Pro before it. After two generations of samey styling, it looks like OnePlus is ready to shake things up with its upcoming flagship, the OnePlus 8 Pro.

If the latest leak, embedded in a tweet, is anything to go by, the new Pro still looks set to feature a curved display, almost certainly OLED; but it will run at up to 120Hz, just like the ROG Phone 2, and feature a punch hole camera in the top left of the screen.

The hole punch might feel like a step back for many. OnePlus introduced the all-screen look with the 7 Pro, and it was one of the phone's defining highlights, giving it a notch-free, futuristic, standout appeal. Now, with a cutout for the selfie camera, the uninterrupted screen could be gone.

Despite this, the hole punch display will mean the OnePlus 8 Pro likely won't feature moving parts. In turn, there's every chance it will be a thinner phone than its predecessor and potentially less prone to damage.

Also worth noting, the new high refresh rate screen is expected to have a variable refresh rate setting, likely loaded up to save battery. If the photo featured in the TrueTech Official tweet is legitimate, options include traditional 60Hz, and 90Hz, as found on the OnePlus 7T.

Additional specs will likely be flagship across the board, and look set to include a new Qualcomm Snapdragon 865 processor as well as four rear cameras. With the launch expected around May, you'll have a bit of time to kill until the details are firmed up, so check out ten of the best camera phones available now, which, naturally, features the excellent OnePlus 7T Pro.