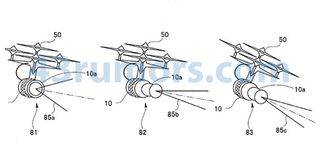 Olympus has designed a camera drone possessing "a high quality camera with large sensor and zoom lens", possibly foreshadowing an entrance to the competitive drone market.

It's a fascinating potential move by Olympus. If the company were to produce a drone using the best Micro Four Thirds lenses, sensor and stabilization technology, it could provide a powerhouse alternative to the best camera drones already on the market.

While Hasselblad cameras are employed in the best DJI drones (since Hasselblad is owned by the Chinese drone specialist), this would be the first time that a major camera manufacturer creates its own drone (though Sony has also been flirting with the idea for a few years).

The Olympus patent was spotted by 43 Rumors, and describes the new camera drone as follows:

"In recent years, an unmanned aircraft, such as a drone, that flies in a remotely handled or autonomous manner has been commercialized. For example, a relatively small unmanned aircraft is utilized due to an advantage that information can be safely and efficiently acquired in a dangerous area that is hard for a manned aircraft to reach, an accident site or a disaster area in which observation at relatively low altitude is required, and the like. A camera is built in the drone or the like to attain the object.

However, a relatively small lens or image pickup device is often used in the built-in camera, and a picked-up image with sufficiently satisfactory image quality may not be obtained. Therefore, a photographing device with high functionality and high performance may be adopted and attached to the unmanned aircraft. Particularly, a camera that can be equipped with a high-performance lens having a zoom function, an autofocus function, and the like can be adopted to easily obtain an image with image quality desired by a user.

Note that a gimbal system that can accurately support a photographing device on a moving body, such as an aircraft, is disclosed in the specification of U.S. Patent Application Publication No. 2016/0014307."

While the site notes that the patent doesn't reveal whether or not the drone would employ Micro Four Thirds tech, it would certainly make sense for the manufacturer to build around it – or perhaps the 1/2.3-inch CMOS sensor used in the Olympus Tough TG-6. Either way, it's a very exciting prospect for drone photography.