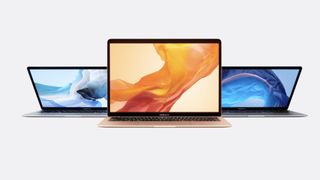 At a big launch even in New York, Apple has taken the wrappers off of some shiny new products - some of which may well make their way into your kit bag soon.

The biggest for photo-editing nuts is the launch of a new MacBook Air with Retina display.

Apple has revealed that the new MacBook Air has 50 percent narrower screen bezels around its 13.3-0inch screen. The screen is packing 4 million pixels which is 4x the resolution of the previous Air. And the pixel push means that the screen offers 48% more color reproduction, which is great for those who want to make photo edits.

The Mac doesn't have a Touchbar, like its MacBook Pro counterpart, but has been given 2x USB-C ports and TouchID and much more security.

As for measurements, the new Air is has 17% less volume than the current one on the market, is 10% thinner and weighs just 2.75 pounds. When it comes to thickness, it's a mere 15.6mm thick at its thickest point. That is impressive and, again, good for the kitbag.

The new MacBook Air with Retina display is made from 100% recycled aluminium, has a Force Touch trackpad (the keyboard is 3rd gen), comes with 8th-gen Intel chip and up to 16GB RAM. Its storage is up to 1.5TB SSD which means A LOT of pictures. And for those that like to blast music out while editing, the speakers have been made 25% louder.

Unlike previous models, the Air doesn't have an SD card slot (taking a leaf from the new MacBook Pros) so be prepared to add additional accessory adaptors to the price of the thing.

The MacBook Air with Retina is out November 7th, with pricing from $1,119.