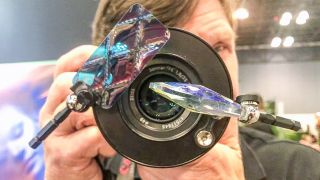 The original OMNI system provides a magnetic ring that attaches to the filter mount of your camera's lens. You then attach maneuverable 'wands' or arms, to which you then attach different gels and prisms. The basic OMNI set costs $99.95 / £89 - and is available in two sizes to suit different ranges of filter thread diameters.

The new Color Expansion Pack two multi-colored crystals, a rainbow diffraction film, plus a variety of luminescent and textured films and gels. The crystals, that look like they are missing pieces from a chandelier, add a range of prismatic colors and fractal effects – which you control by adjusting the position of the wands.

There are nine different Lumi films, which have a textured finish that helps introduce flare into the image. Also in the pack are five new color gels. Last, but not least, there is a Crisscross Rainbow film, that provides a diffraction effect that creates rainbow patterns across the frame.

The best fisheye lenses in 2019