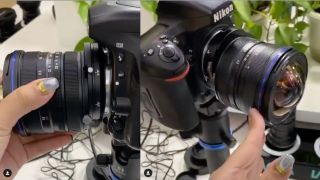 According to Photo Rumors, it's one of several new lenses on their way from the innovative Chinese lens maker, which specializes in ultra wide and macro lenses.

A shift lens uses a special movement to shift the image circle up and down in the frame so that you don't have to tilt the camera to capture tall buildings or high-ceiling interiors. This is too niche for regular snappers, but a must-have for architectural photographers.

Nikon and Canon already make their own shift lenses, but Nikon's widest is its PC NIKKOR 19mm f/4E ED, and while Canon does have a TS-E 17mm f4L lens, both are expensive, at around $3000 and $2,000 respectively.

More important, there are currently no own-brand shift lenses available for full frame Sony or L mount cameras. Samyang does make a less wide 24mm shift lens in various mounts including Sony (but not yet L mount) and Laowa's existing Magic Shift Converter can adapt DSLR lenses to produce a shift movement, but the Laowa 15mm f/4.5 shift lens will be the company's first shift lens and also the widest full frame shift lens on the market. It could really open these systems up to professional commercial photographers.

Nikon Rumors has seen this new lens in the wild and has posted a video on Instagram.

The Laowa 15mm f/4.5 will not have the extra tilt mechanism offered by the Canon and Nikon lenses for controlling the plane of focus for subjects shot at an angle, but for most architectural photographers, it's the shift movement that's important.

Besides, this lens's headline feature is its 110-degree angle of view. It's an amazing optical achievement, and not just because of its ultra-wide angle of view, but because it has an enlarged image circle big enough to handle an 11mm shift movement.

Other specifications have now been published by Photo Rumors:

The Laowa 15mm f/4.5 shift lens has not yet been officially announced by Laowa but we have been told we might be able to get a sample for review in the middle of 2020. We don't yet know the price, either, but we are hoping it will substantially undercut the Canon and Nikon versions and perhaps make lens-shift photography affordable for enthusiasts, not just pros.