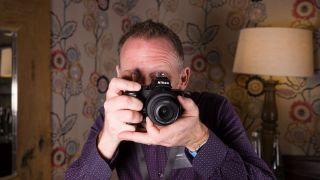 Yeah, it caught us out too. Nikon has broken the GOLDEN RULE of camera naming, where you can mix any combination of letters and numbers in any way you like, but there must be NO SPACES. Nikon makes the D7500 and D750, Canon makes the 90D, Sony makes the A7R... everybody knows where they stand. Until now.

We know they're the same thing, but just be aware that Google doesn't – so be careful what you search for.

But it's fine. Nikon can call its cameras what it likes. We wondered what the thinking was, though, so we asked them.

Q: Why is there a space between the 'Z' and the '50', do you know everyone is getting it wrong and do you really mind how it's spelled?

A: “The ‘Z’ represents the brand mark and the ‘50’ is the product designation. Therefore we separated the Z (to represent Z Series) – the two sit apart as a result. The format was first introduced with both the Z 6 and Z 7. From a Nikon perspective we will always adopt the space, but I do admit that it’s quite hard to establish in the public psyche.”
Jeremy Gilbert, Marketing Director, Nikon Northern Europe