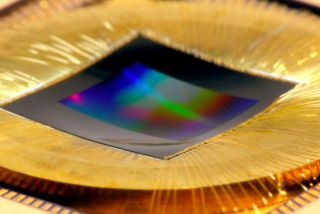 Is a medium format Sony camera with a curved sensor on the way? Whether or not such a camera ever makes it to market, Sony's research and development teams are certainly designing one.

The lens designs discovered by Sony Alpha Rumors detail five lenses, most of them in the telephoto range:

So what exactly is a curved image sensor? As the name suggests it's a sensor that, rather than the traditional flat design, mimics the design of the retina in the human eye – and this, according to Sony when it revealed its technology in 2014, results in a simpler lens system that is 1.4x more sensitive at the center and 2x more sensitive at the edges.

According to a report by IEEE on that original presentation by Kazuichiro Itonaga, a device manager with Sony's R&D Platform:

"A curved CMOS sensor has a few advantages over a planar sensor, Itonaga said. Because of the geometry, it can be paired with a flatter lens and a larger aperture, which lets in more light. Photodiodes at the periphery of a sensor array will be bent toward the center, which means light rays will hit them straight on instead of obliquely. What's more, the strain induced on a CMOS sensor by bending it alters the band gap of the silicon devices in the sensor region, lowering the noise created by 'dark current' – the current that flows through a pixel even when it is receiving no external light."

So, is such a sensor realistically going to emerge? It's no exaggeration to say that this is the next frontier of camera technology; Sony patented its curved medium format sensor in 2017, followed by Nikon patenting a curved full-frame sensor, and both Canon and Microsoft are also developing the idea. So yes, there is officially an arms race taking place.

The fact that Sony has gone so far as to develop lenses is an interesting revelation. If it had simply stuck with the sensor, that might suggest that it is happy to selling medium format sensors to Fujifilm and Hasselblad. However, given that it is now designing optics as well, you might connect the dots and predict that a full system is in the works…

The best medium format camera in 2020: big sensor cameras for experts and pros
The best Sony camera in 2020: from Cyber-shots through to Sony Alphas
Fujifilm GFX 100 review