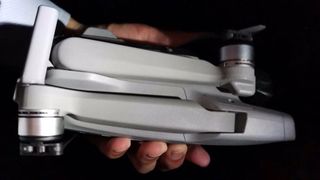 Images of the upcoming DJI Mavic Air 2 drone have recently appeared, giving DJI fans their long-awaited opportunity to discover a few more details about this highly anticipated product. In addition to the leaked photos, it's also rumored that the DJI Mavic Air 2 could be appearing as soon as late April.

As reported by rumor website Photo Rumors, it seems that the new DJI Mavic Air 2 will be sturdier and more solidly built than the original Mavic Air, "The Air had a somewhat fancy, but also complicated and fragile design. Remember those tips at the front legs that you'd have to fold out? The new DJI Mavic seems to be much more straightforward and simple in its design."

The DJI Mavic Air 2 will apparently feature a 3-axis stabilized gimbal and camera, but it won't have a one inch sensor like the DJI Mavic 2 Pro. However, it is rumored to have 4K video capability and video is likely to be generally better, with increased dynamic range and fewer compression artifacts, across the board from the original Mavic Air.

Other features are likely to include 360-degree obstacle avoidance and ADS-B capabilities, which will make the DJI Mavic Air 2 the safest drone yet from DJI. With drone legislation proving to be a tricky minefield for drone manufacturers to navigate, the more safety-focused a product is, the less DJI would have to worry about its longevity in the face of new laws.

Other interesting tidbits of information include the rumors that the DJI Mavic Air 2 will have new motors, props and ESCs (Electronic Speed Controllers). Its flight time is also likely to be around 30 minutes.

With the DJI Mavic Air 2 expected in late April, it won't be long until we find out more information. In the mean time, we'll be keeping a keen eye out for any more DJI leaks!