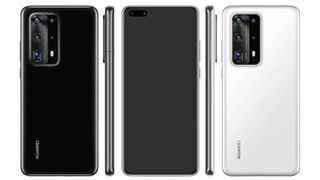 The Huawei P30 Pro stunned us with its roughly 5x optical zoom periscope camera. Almost a year after it launched, it's still the telephoto camera phone to beat, alongside the Oppo Reno 10X Zoom, with a spot on our best camera phones in 2020 list: but that's set to change when the upcoming Huawei P40 Pro launches in the coming months.

Renders from renowned leaker @evleaks showcase the phone's design, which looks very reminiscent of the upcoming Samsung Galaxy S20, with its curved screen and off center, rectangular camera surround. The P40 Pro also differs from Huawei's latest flagship in a few key ways - Huawei appears to have brought back the volume buttons, and while we have no dimensions yet, the P40 Pro looks like a thicker phone to accommodate its periscope zoom.

Most striking are the numbers etched slap bang in the middle of the P40 Pro's penta-camera box - "1.8-4.0/18-240", suggesting Huawei's new flagship will feature an 18mm ultra-wide angle camera and a 240mm telephoto lens with a widest aperture of f/1.8. This will create a roughly 10x optical zoom if the primary camera's focal length is between 24-26mm, as found on most smartphones.

The P40 Pro launch event is yet to be confirmed, but it's almost certainly going to launch without access to the Google Play Store, which puts into question whether the phone will even make it to Western markets. Irrespective, from an imaging point of view, it looks set to be the smartphone to beat - expected around March 2020.