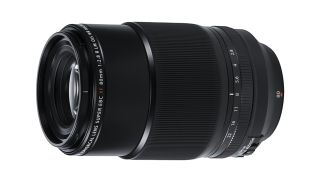 Alongside the announcement of the X-E3 compact system camera, Fujifilm has also confirmed two new optics.

The Fujinon GF45mm F2.8 R WR is the sixth addition to the company’s G-Mount range of lenses, which currently only have the GFX 50S as a compatible host body.

Aimed at street and documentary photographers, the lens has a focal length equivalent to 36mm in 35mm terms, as well as a physical aperture ring around its barrel.

Its optical construction makes use of ED and aspherical elements, while the further application of Nano GI coatings is said to help reduce ghosting and flare.

Nine rounded diaphragm blades have also been used to help produce circular bokeh, while the optic is finished with a dust- and weather-resistant casing, which allows it to be used in temperatures down to -10°C.

The other new lens is the Fujinon XF80mm F2.8 LM OIS WR Macro, which is designed for X-series mirrorless bodies such as the new X-E3.

The is the second macro lens Fujifilm has announced for its X series, following the XF 60mm F2.4 that was announced back in 2012. Unlike that lens, however, the new optic offers a true 1:1 magnification ratio, which means that it can reproduce subjects on the sensor at the same size as they appear in reality.

The water-resistant lens offers a focal length equivalent to 122mm on a full-frame camera, and features its own stabilisation system that promises up to five stops of correction.

The new optic also makes use of a new Floating Focus System, which alternates between front and rear focusing groups, depending on the camera to subject distance. By doing so, Fujifilm claims that any aberrations are kept at a constant level.

Other features include a water-repellant fluorine coating on the front element, as well as compatibility with 1.4x and 2x teleconverters.

Fujifilm has also taken today’s releases as an opportunity to make available an updated roadmap for X-series lenses.

The company had previously stated that the X Mount range would welcome an ultra-wide zoom and telephoto prime lenses; now it has confirmed these will be the XF8-16mm F2.8 R LM WR and XF200mm F2 R LM OIS WR.

The G Mount, meanwhile, will be expanded by the GF250mm F4 R LM OIS WR and a GF1.4x TC WR teleconverter.

All products in development are set to join the two lineups sometime in 2018.

Both lenses will be released in November.