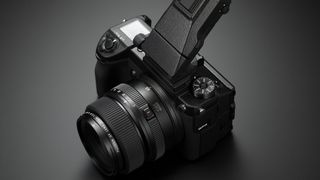 It’s been a busy day for Fujifilm at Photokina 2018.

Not only do we have two new arrivals on the GFX camera scene – the 100MP GFX 100S and the slimmed down, more affordable GFX 50R – but three new lenses have also been added to the GFX roadmap.

Second in the announcement is the Fujifilm GF50mmF3.5 R LM WR, a standard prime, which Fujifilm says will be the smallest and lightest lens in the GFX range, and is thus designed to complement the sleek new GFX-50R. Its 50mm focal length works out to 40mm equivalent.

With these three additions, the GFX lens range now comprises a total of eleven models. Exact word on pricing and release date for the new optics is still to be confirmed.