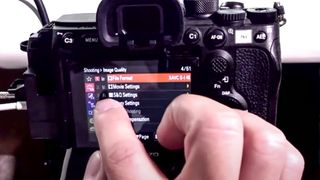 UPDATE: The new menu system with touch controls, introduced on the Sony A7S III, will not be coming to older cameras, the manufacturer has stated.

While many had hoped that the long-awaited menu over might make its way to existing Alpha cameras from the Sony A7S III, it appears that this won't happen because the new system requires the new Bionz XR processor.

"There has been criticism of the menu structure of Sony cameras for some time and the question was whether the improvements via a firmware update also come to existing cameras," writes Dutch website Tweakers (hat tip to SonyAlphaRumors).

"Sony reports to Tweakers that this will not happen and claims that this is technically not possible because the A7S III has a new design with a new chipset. However, the spokesperson expects that future cameras will receive the new interface."

ORIGINAL STORY (29 JUL): After what feels like an eternity, Sony has finally revealed the Sony A7S III – a 4K video powerhouse that doesn't do anything exciting in the resolution stakes, but also doesn't overheat the way other cameras do.

However, the most exciting thing about the Sony A7S III isn't the camera itself, but the fact that Sony has – at long, long last – implemented a new menu system. And this is nothing less than manna from heaven for long-suffering Sony shooters, who have wrestled with its obtuse structure not just since the inception of the Alpha line, but even the NEX system before it.

Not only has Sony redesigned its menus, it's actually done something else a bit radical: you can now actually navigate the menus using TOUCH on the camera's TOUCHSCREEN. What sorcery is this!

The labyrinthine and nonsensical layout of the menu system has been a frustration among Sony users for years, and is so notorious that it has even become a chuckling point for Sony ambassadors and during official PR presentations.

Thankfully, the new menu layout of the Sony A7S III addresses most of the issues that users (and message board critics) had with the system. The new interface now possesses a vertical structure across three pages, displaying up to seven options at a time, and changes when you're adjusting stills or video settings.

Important shooting options are now both much (and we mean MUCH) easier to find, and everything feels a lot more logically and instinctively laid out according to their actual priority (so you won't find things like format options, which should be front and center, buried halfway down obscure submenus that you wouldn't even think to look in).

Even so, there are still some typically bizarre Sony-isms, including such peculiarly abbreviated options as "Emph dips dur REC".

Of course, there is plenty else to be excited about the Sony A7S III – it does 4K without overheating, which can't be said of the Canon EOS R5, Canon EOS R6 or Fujifilm X-T4, it uses the shiny new CFexpress Type A format, and its full-frame 12MP sensor makes it an amazing low-light photo and video tool.

Still, for us the single most exciting thing is Sony's decision to revamp the menus – because that means we can safely expect to see them rolled out on all new Sony cameras from here. Hallelujah!