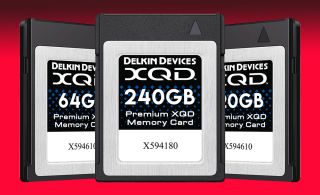 American accessory company Delkin Devices has announced that its arange of XQD cards are now ready to ship. With a speed rating of 2933x, the cards are designed for high-speed continuous shooting and for high-definition cameras. The cards will be available in 64GB, 120GB and 240GB options a couple of months after their original on sale date. A USB 3.1 XQD card reader has also been introduced.

Previously the card format had only been used by Nikon D850, D500, and D5 DSLRs – as well in some Sony XDCAM broadcast camcorders. At present, XQD cards are manufactured and sold solely by Sony. They offer far faster data transfer speeds that older memory card formats, such as SDXC or CompactFlash.

Delkin will also offer a unique built-in insurance policy for their XQD memory cards and will replace any non-working XQD card. "This covers the unthinkable, from salt exposure to even pet and child inflicted damage" Jenn Sherry, Delkin's Marketing Manager explains. "Should anything happen, just give us a call and we'll send you a brand new replacement card that you'll receive in less than 48 hours, along with a pre-paid shipping envelope to get your damaged card back to us."

The Delkin cards will offer a maximum write speed of 400MB/s, and read speeds of 440MB/s, and are XQD format Version 2.0 compliant.

Each of Delkin's XQD cards has a serial number – just like your camera and lenses. Delkin says that this helps improve customer support, and provides the extra protection and insurance.  Owners can register their cards at www.delkindevices.com/xqd/.

Which cameras use XQD memory cards?

Delkin Devices has also started shipping a USB 3.1 XQD adapter. This XQD card reader offers a SuperSpeed+ USB 3.1 interface - which promises file transfer speeds of up to up to 10Gbps (2x faster than USB 3.0).

Buyers' guide: The best memory cards for your camera