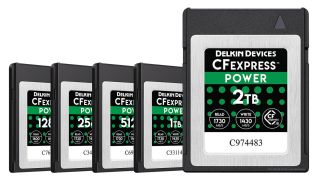 CFexpress is the up and coming new memory card format for high-end camera and video gear, boasting not just the high data transfer speeds demanded by professionals, but seriously impressive storage capacity too – but this is something else!

The CFexpress format is used by the Canon EOS-1D X Mark III and upcoming Canon EOS R5 model, by Nikon in the Nikon Z 6 and Z 7 and the new Nikon D6, and by Panasonic in its full frame mirrorless Lumix S1 and Lumix S1R models.

There are 512GB CFexpress cards on sale already, and memory card maker ProGrade has announced a 1TB card, but the new 2TB Delkin card is the biggest yet. In fact, it is the highest capacity memory card ever, of any format!

Delkin already makes a range of CFexpress memory cards in its Power range, from a 128GB card right up to the brand new 2TB option.

As a result, the new CFexpress card offers both capacity and speed. It uses a 3rd generation PCI Express interface and NVM Express support to offer the performance needed for cinema-quality video capture, and not just at 4K but 6K and 8K too, and at high frame rates and bitrates.

This performance will obviously come at a price and we are waiting for confirmation of this and the new card’s availability. Currently, the Delkin CFexpress Power 1TB card costs around $890, with the 512GB version at around $500.