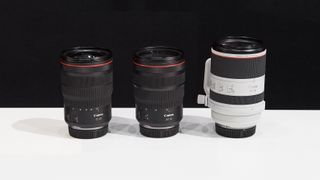 This would be a major step in the maturity of the R system, meaning that by the summer the Canon EOS R could finally have the essential trio of native lenses to make it a professional-grade tool.

The report comes courtesy of Canon Rumors, which did some digging on an official announcement for the eagerly anticipated optics. "We’re told that all three 'should' be officially announced and available at the same time, and likely before the end of July 2019," wrote the site.

The Holy Trinity of lenses is so-called because it comprises the three main focal ranges that cover the vast majority of photographic work (and thus are the workhorses of a professional's kit bag, meaning that many pros won't adopt a new system until it has them).

All three lenses have a fast f/2.8 aperture, again a must-have for professional use, and are part of Canon's red-ringed signature L-series, meaning that they are engineered for premium performance and possess robust build quality and weather sealing.

The addition of these lenses would go a long way to filling the Canon RF lens roadmap – and would deliver half of the manufacturer's promised six lenses for its full-frame mirrorless system by the end of 2019.

If the report is accurate, it would certainly pave the way for the much-rumored Canon EOS R pro model that is expected to be announced later this year. With a full professional system, many previously reluctant photographers may fully embrace Canon's mirrorless future.