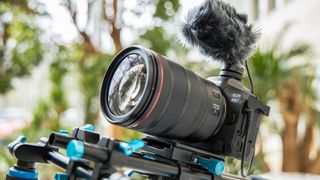 In addition, it was announced that the full-frame mirrorless Canon EOS R5 will feature advanced animal AF, that is able to perform both eye and body recognition to detect and track birds, dogs and cats.

"We've seen speculation that the EOS R5's specs are 'impossible'," said Richard Shepherd, Canon's Pro Product Marketing senior manager, alluding to the online speculation that the video features would in some way be compromised (namely with a crop, as seen in the 4K of the Canon EOS R and Canon EOS 5D Mark IV, or the lack of Dual Pixel seen in the video of other bodies).

"Today’s announcement confirms once again, we are achieving the 'impossible' in order to support our customers' need for a camera that delivers exceptional image quality and video capture."

Canon claims – and this does seem, on paper, to be very much the case – that the R5's video capabilities "will far exceed that of competing cameras on the market." Its full-width full-frame video will support Dual Pixel CMOS AF in all 8K modes, promising truly formidable footage.

It is not yet clear whether the advanced animal AF (which can recognize animals based on their bodies, when eyes are not visible) is similarly supported in all 8K modes, but the feature alone is a significant step in Canon's autofocus technology. Furthermore you can choose between dogs, cats and birds within the menu settings – and the prospect of being able to track a bird in flight with such an AF system sounds particularly attractive.

"As an industry leader, we are challenging the market with this launch and showing what’s possible with our technology," added Shepherd. "The EOS R5 and the RF lens system is proof of our commitment to redefine mirrorless and shows Canon’s unparalleled strength in creating products with true purpose."

Other confirmed features so far for the upcoming Canon EOS R5 include: