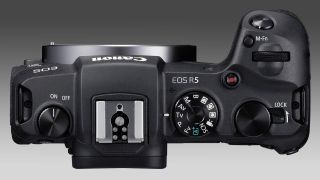 A set of eyebrow-raising specs have leaked for the Canon EOS R5 – Canon's next full-frame mirrorless camera, previously dubbed the Canon EOS RS, which will apparently begin shipping in July.

The leaks suggest a powerful system with a 45MP sensor, 5-axis in-body stabilization, up to 8 stops of stabilization when coupled with lens IS, 8K video at 30fps and 4K up to 120fps, and continuous shooting at 12fps mechanical and 20fps electronic.

While any leaks should be taken with a pinch of salt, Canon Rumors – the original publisher of these specs – is standing firmly behind them. Some details have been corroborated; Canon Watch, for example, cites a source confirming the 45MP sensor. Other details would likely, if true, come with a bit of an asterisk beside them.

We are dubious about the 8K video and 4K at 120fps, for example. However, it is possible that these are either limited in function (such as the 6K Burst seen in some Panasonic bodies, or a timelapse mode) or invoke a crop factor. We assume that the camera will record full-width 4K up to 30fps, like the Canon EOS-1D X Mark III.

Canon Rumors suggests that the Canon EOS R5 could be announced in February, at or ahead of CP+ in Japan, and also listed some possible physical details of the camera – though the site was less certain of these.

It will apparently feature the addition of a scroll wheel on the back, a Live View / Movie toggle switch similar to EOS DSLRs, the removal of the unpopular M-Fn touch bar, and a battery that looks like the LP-E6 but has a larger capacity (we think it's possible that it is actually the same battery, but Canon has squeezed more shots out of it in the same way as it did with the 1D X Mark III).

One question you might still be asking is why EOS R5, not RS? After all, the current Canon EOS R successors – the Canon EOS RP and Canon EOS RA – all feature alphabetical suffixes, not numeric ones. And the R5 wouldn't even be the fifth R-system camera released (it would be the fourth) – unless, of course, one of the other three rumored EOS R bodies is announced beforehand.

It's also entirely possible that people who have handled the camera have misread "R5" as "R6", or vice versa.

What does give credence to the R5 name, however, is the fact that another camera has just been leaked – the 20MP Canon EOS R6. We know much less about this new sister camera, but it certainly looks like Canon is going to have a very busy 2020…