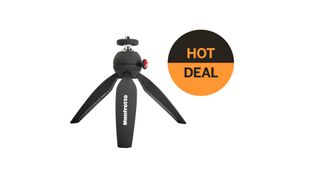 Black Friday camera deals are continuing to come in, and this one caught our eye – you can pick up a Manfrotto PIXI mini camera tripod for just £12.99!

This is just one of many amazing Amazon Black Friday deals on photography kit, but you'll have to act quickly as the deal expires at the stroke of midnight tonight!

The PIXI mini tripod is a pocket powerhouse of a camera support. You can mount a smartphone on it using the Manfrotto KLYP accessory – perfect for trying creative shooting techniques with the camera you have on you all the time.

And the PIXI's universal 1/4-inch screw thread and 1kg payload means you can also attach your other cameras – from compacts and CSCs all the way up to entry-level DSLRs.

But the PIXI isn't done yet. Fold its legs together and use the handle they form as a comfortable grip for shooting video… this is one super-versatile product.

Why not buy more than one – you'd be crazy not to at this price!