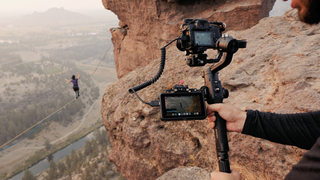 Atomos turns 10 years old in 2020, and it is celebrating by reducing the Atomos Ninja V by a cool $50. You've gotta love those friends who share the love on their birthday!

The Atomos Ninja V will be reduced to just $649 for a "limited time only", marking one of the lowest prices we've ever seen for the fantastic external screen, which tops our list of best on-camera monitors on the market right now.

The Ninja V has set a new standard for external monitors, delivering up to 4K 60p Apple ProRes and AVID DNxHR recording, Apple ProRes RAW recording over HDMI at up to 6K 30p, 1,000nit calibrated high brightness HDR display and plenty more besides. All of which made it a fitting choice for Atomos' first birthday promotion of the year – with more still to come.

"2020 sees the 10th anniversary of the birth of Atomos," stated the company in a celebratory release. "We will be marking the occasion throughout the year to show our gratitude to everyone that has been a part of this journey."

For those interested in Atomos' ten-year legacy, the company offered a crib notes version of its past to catch you up.

"The Atomos journey started when our CEO Jeromy Young released the original Ninja HD HDMI monitor recorder a decade ago, bringing Apple ProRes recording to an affordable camera top device that was also a monitor — unlocking much higher quality recording from many cameras, especially DSLRs. It also made Atomos a bridge between the camera world and computing world. The superior ProRes files produced made for much easier editing and post processing in programs like Apple Final Cut Pro, Adobe Premiere and AVID Media Composer.

"Fast forward a decade and Atomos have also led the way with a series of products and technologies that have changed the industry for the better. We brought 4K recording to mirrorless cameras for the first time with either the Ninja Assassin or Shogun combined with Sony’s A7S. We led the way with on-camera HDR monitoring and we changed the industry again when we launched ProRes RAW recording from a wide range of popular cinema cameras."

If getting the brilliant Ninja V for a discount price is just the first of many birthday celebrations, we can't wait to see what presents Atomos unwraps for us next…

Best on-camera monitors: external screens and video recorders for filmmakers
Why ProRes RAW is the next file format you should really know about…
RAW video output for Nikon Z6 and Z7, plus CFexpress compatibility!