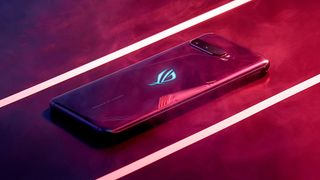 The Asus ROG Phone 3 has officially been launched with a whole host of impressive specs designed to tempt hardcore gaming fans. This third generation gaming camera phone has the newly unveiled Snapdragon 865 Plus chipset, an AMOLED 10-bit display with a super-responsive 144 Hz refresh rate and a powerhouse 6,000 mAh battery.

The recently unveiled Snapdragon 865+ is the first mobile chipset to surpass the 3GHz CPU clock speed ceiling, achieving a 10% increase increase compared to the 2.84GHz frequency of the original 865.

The Snapdragon 865+'s Adreno 650 CPU has also received a clock boost, which means that it has a 10% better chance of hitting the required game frame rates to make the best use of the impressive 144 Hz screen refresh rate. Including the 865+ in the Asus ROG Phone 3 will mean that we'll see an even more impressive and powerful performance from this gaming phone.

The Asus ROG Phone 3 will have a 6.59" OLED display and will also feature up to 16GB of the latest LPDDR5 RAM and up to 512GB UFS 3.1 ROM. It'll also have a groundbreaking new ROG HyperFusion technology that will combine with multi-antenna WiFi and 5G to allow simultaneous connections to WiFi and the mobile network. The phone will then intelligently decide which has the best signal so that gamers can enjoy the best possible connection.