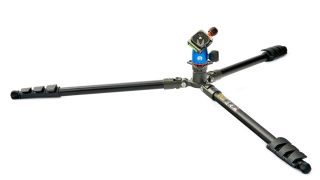 British tripod manufacturer 3 Legged Thing has broadened its Punks tripod lineup with the Patti, a new general-use tripod with a keen price tag.

Pitched as "an ideal starter tripod for users of compact, bridge, mirrorless, and lightweight DSLR cameras," and named after punk legend Patti Smith, the model is said to be designed from aircraft-grade magnesium alloy, with hard-wearing ABS plastic also used at various points.

It measures 45cm/17.7in when folded and extends to 1.63m/64in when fully extended, with flip locks to hold the legs at the desired position.

While pitched at a novice user, the tripod boasts a handful of features more commonly associated with pricier models. The single-section centre column is both removable and reversible, for example, while the tripod's payload is a generous 10kg/22lb.

Other features include a patented Tri-Mount plate that lets the tripod stay compact when the legs are folded up, as well as three hollowed spurs that allows for accessories to be attached.

The announcement follows the recent launch of the Alan and Trent models, as well as a new foot stabilizer.

3 Legged Thing has stated that Patti will be available in two separate finishes: Punks grey with blue AirHed and accents of copper, and Punks Anarchy matte black with accents of British Racing Green.

The tripod will be available to pre-order from 14 August, and the release date will be a month later, just before Photokina 2018 swings its doors open. The company has also confirmed that the model will be on display at the show (Hall 2.1, Stand A25/B26).