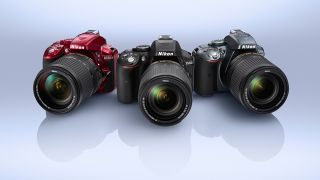 Nikon photographers certainly aren’t spoilt for choice when it comes to selecting a DSLR, but too much choice can present problems too.

Those coming to photography for the first time, or picking it up again after a spell away, may be unsure whether to opt for an entry-level camera like the D3300, launched in 2014, or push their budget a little and go for the slightly higher-specced D5300.

If that sounds like you, fear not. In the following article, we'll take a closer look at all the key areas where these two differ so you can make the right decision for both your needs and budget.

Despite the D5300 being the more advanced camera, it’s interesting to note that these cameras are on a par with each other when it comes to both sensor size and ISO range, both of which will affect image quality.

Both cameras feature a 24.2MP APS-C-sized CMOS sensor, without a low-pass filter, and this is paired with Nikon’s EXPEED 4 processing engine. This kind of pixel count is more than enough for photographers looking to create prints measuring A3 in size, but you can get away with larger sizes if your images are destined for the wall.

Both the D3300 and the D5300 have a native ISO range of 100-12,800, which can be expanded to a setting equivalent to ISO 25,600, and this will enable photographers to keep shooting handheld when light levels fall.

Considering the D3300 and D5300 were respectively launched three and four years ago, both still hold up well in this department.

Both cameras offer budding videographers plenty to work with, recording in Full HD quality. In fact, the D5300 was Nikon’s first DSLR to offer a 60/50p frame rate at Full HD resolution.

Both cameras are designed with a 3.5mm external microphone port, which is unusual for a entry-level camera such as the D3300. Interestingly, on the newer D3400 (the D3300’s replacement), Nikon chose to drop this port. With the external mic, it’s possible to capture enhanced audio that can elevate the quality of your video creations.

Although there’s no 4K option, Full HD is good enough for YouTube or social media applications and, because both cameras include that 60p frame rate, the footage can also be used to create dramatic slow motion sequences.

Again, despite the differences in age and price, both the D3300 and D5300 share the same maximum burst rate of 5fps. Given that many models at this level are still being released with 3fps and 4fps options, this is perfectly respectable, even if it isn't quite extraordinary.

When greeted with fast action or wildlife scenes, 5fps should still enable you to capture the action without missing too many moments.

So far these two cameras have matched one another pretty well, but when we look at their autofocus systems, the gap between the two starts to widen.

While the D3300 offers 11 AF points, which is again perfectly fine for a camera pitched at this level, the D5300 more than triples that count, offering 39 AF points arranged around the frame.

This includes 9 cross-type AF points compared to the D3300’s single cross-type point, which means the D5300's system is ultimately better equipped to sense a wider range of details in the scene.

The benefits of an increased AF point system can not be underestimated; the more points you have the more accurately the camera will be able to focus on a range of different details in the scene.

If you only ever shoot landscapes or portraits, having a high number of AF points is less of an issue, as you'll be taking your time to focus and maybe even focusing manually. However, for more general use and any sorts of images that involve motion, you’ll want the higher AF point system from the D5300.