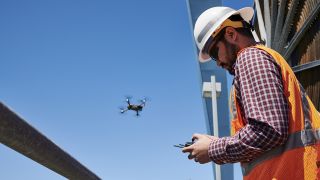 One of the best things about a hobby like photography is the ability to take on a few freelance assignments and make the gradual transition to being a professional. Drones offer a similar route, but if you are going to make money from a drone there are a few rules and regulations that are unique to flying cameras.

If you’re taking the step from hobby to income stream, there are a few things you’ll need to add to your flying bag, which we’ll look at below. Even the best drones need know-how, a degree of skill and knowledge of the law.

The first question you need to ask yourself is “Do you have what it takes to be a pilot?” If that sounds a bit macho, worry not – this isn’t about doing loop-the-loops and pulling a 5G turn without emptying your stomach. What professional pilots really have to deal with is checklists, regulations and communication.

Below follows a list of what you’ll need, rounded off with a list of professional drones you might soon find yourself wanting as you extend your client base.

You might think you can comfortably fly your aircraft – in fact with GPS switched on it’s not especially difficult – but that’s only part of the puzzle. You’ll also need to understand all the relevant air law which, as you can imagine, is both extensive and always subject to review and updates. Aviation authorities like the FAA and CAA produce and update a good deal of this and, while they’re certainly not the enemy, they do have a lot to worry about; airliner certification, government lobbying and much else besides. By its nature this is bureaucratic and complex.

A good trainer will put a human face on all this for you, and you should be looking for an organization you can build a relationship with. They will remember you, and help you keep your paperwork up to date. Budget for annual renewals or re-training as qualifications are updated. In the UK, for example, the current PfCO will change to a new system, called the GVC in July 2020, but what re-training is needed won’t be known until May. This kind of change is happening in every jurisdiction, and you need to monitor it, or work with someone who handles that for you.

You can find what to do next at the FAA Become a Drone Pilot page in the USA. In the UK look for a Full NQE which can carry out the training and exams, like Fly Icarus.

With every individual job, you’ll need to know whether you can take off at all. Your training will tell you how to read the aviation charts, but you should still pick up a printed one for your bag. As a drone pilot, you’ll be flying VFR (Visual Flight Rules), so it’s these charts you need.

In the US you can get your local FAA Charts: VFR from Amazon. In UK and Europe look for the Rogers VFR charts.

As a backup, it’s also useful to use an App which can provide live data. Great examples are

These have the advantage of accessing NOTAMs (Notice to Airmen), which warn of temporary restrictions (from cranes or air shows, say).

Commercial liability insurance is a necessity, and the market has got options for those working full time or operating more casually, with most offering the choice between monthly renewing policies and flexible per-flight protection. What you’re insuring against, for the most part, is the damage you can be responsible for with your aircraft (liability), which explains why the ‘basic’ cover protects you for a million or more in that category. Despite the high liability numbers, you may find the ‘Hull’ cover doesn’t cover the cost of your aircraft and equipment unless you spend a little more – be sure to check your policy.

UK pilots look at Moonrock Insurance and Flock (who have an app which can give you a live risk-metric and quote based on your choice of aircraft, location and time).

US users can get quotes at RVNA .

Operating drones in the great outdoors means you’re likely to encounter imperfect surfaces. With many professional aircraft shorter than the average blade of grass, a take-off and landing mat is essential, but avoiding dirt and sand is just as crucial. There is also an important safety case to be made for it. Should you be out of action for any reason, the mat acts as a warning to others highlighting where the drone’s

Your liability insurance will certainly require you to be prepared for possible risks, and an ever-present concern when working with Lithium batteries is fire. You need to have the necessary equipment to suppress a fire, whether that is a fire blanket or a fire extinguisher. The former has the advantage of being compact and light, so can fit in many drone bags.

Lithium battery fire caused by short circuit test by the University of Maryland.

It’s just as important (and, in most places, just as compulsory) to ensure that your batteries cannot start a fire when they’re not in use. Damage can take some time to reach combustion, so you should always keep batteries in a fireproof container known as a “li-po bag,” in essence a fireproof blanket in the form of a bag.

Hopefully just another insurance requirement, but easy access to a first-aid kit is never a bad thing to have anyway. Because of their ubiquity, these kits are surprisingly cheap, and contain the necessities you’ll need to tackle minor injures, an ever present risk with propellors which average 20,000 RPM.

While amateurs will likely find they’re happy with the flight records apps like DJI Go 4 keep, these are unlikely to satisfy regulators, who may need to ensure you’re recording enough flight hours in paper form. In fact it’s best to keep a copy of your mission log, your flight operations manual (the rules you operate by) and any specific permissions (landowner, local air traffic control etc.) for the job you’re on with you at all times, since you never know who may ask.

When you’re working professionally, you don’t get to pick the weather. That means you’ll need to know just how close you are to the windspeed limits before you take off, and the only way to do that accurately is measure it. Luckily suitably-accurate measuring devices are compact and relatively inexpensive. The Benetech GM816 is the most modestly priced, though you might find some advantage from the BTMETER BT-100 over time, since the latter takes the ubiquitous AA cells which last a good bit longer than the CR2032 button cell used in the Benetech model. (Both are sold under a number of different brand names).

It has to be said that high-visibility goes two ways. On a busy site, you certainly want to make sure you’re seen by others operating dangerous equipment – indeed it might well be a requirement – but at the same time there are risks to drawing attention to yourself if the public can stray near. Once you’ve taken off, you don’t want interested members of the public disturbing you, however enthusiastically, so a vest with Do Not Disturb is a nice touch.

Given you’ll need space under your control to take off and land, it’s very likely you’ll need some cones to mark out a spot. They’re handy for measuring out operating distances or keeping people from your take-off site. You won’t be able to get away with light sports-grade cones though – a gust can push them over; make sure you get something with a weighted base and you have space to carry it.

If you’ve not already got your aircraft, then please check out out our full best camera drone guide. For professional work there are a few noteworthy aircraft that you might want to give particular attention to though, listed here.

Both of DJI’s Mavic 2 aircraft offer particular uses to professionals looking to get high quality imagery with the minimum of fuss. The other model, the Mavic 2 Zoom, has the advantage of an optical zoom lens, great for orbiting video, while the Pro model boasts a 20 megapixel 1-inch image sensor making it more than capable of professional footage promised by its name.

If you’re looking at reaching clients in construction, public works, or emergency services, the Anafi Thermal is the drone to have. Essentially the same airframe as the consumer Anafi, though with improved feet, and still featuring it’s 21-megapixel sensor this is already a useful drone. Surveyors are especially keen on the unique ability to tilt the camera 90 degrees up as well as down, useful when inspecting bridges. The thermal camera can be used in emergency searches for body heat, or to add crucial heat-loss data to surveys. The Anafi is also available in a ‘Work’ flavor which comes with Pid4D 3D modeling tools.

For exacting photography it feels strange to be stuck with a fixed lens. The DJI Inspire series, although not the newest in the line, was a long way ahead of the game when it was launched, so even at three years old it’s a great machine. Moreover, for pros, it provides a standardized gimbal mount, meaning owners can replace the gimbal with wither a fixed zoom (X4S) a micro 4/3rds system (X5S) or a selection of primes (X7). On the airframe itself is the capacity for CinemaDNG and Apple ProRes shooting at up to 5.2K. The only downside is, with a take-off weight just over 4Kg, it will soon need to be kept a good distance away from people (other than those you’re working with).

Of course this isn’t the pinnacle of the drone market, but it is the point it starts to become difficult to simply buy an aircraft and not enter into a service agreement. DJI have a Matrice 210 line which is like an uglier, but more adaptable, version of the Inspire line. They also offer RTK versions of this, and their iconic Phantom, designed for extremely accurate mapping.

Mapping & surveying, incidentally, is a huge part of the commercial drone market thanks to software services like Pix4D and Drone Deploy. They can, with their flight-planning apps and cloud-based processing, use the positional data from hundreds of aerial photos to generate stunningly accurate 3D renderings of an environment. These, in turn, can be used for tasks you might not immediately image, like taking a measurement of the volume of a spoil heap at a work site so the right number of trucks can be booked. Other features, like “crop stress" which helps farmers determine problems and allocate fertiliser early, are also available.

Just as with the photography business, though, you also need to pay attention to finding clients so before you start to get too excited about the next aircraft or software service. Think more about refining your showreel and listen to what people you can reach actually need.

It seems that qualifications will increasingly be organised this way too – you’ll get a baseline approval, then add additional qualifications, or “competencies,” like night-flying, or operating near the public. That’s why the first item on this list was pilot trainer – and the last. It is the most crucial relationship, especially for solopreneurs.