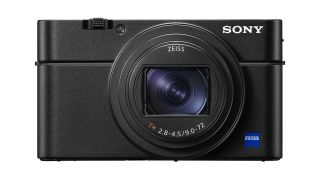 The original Sony RX100 was something of a landmark for compact cameras... thanks to its premium, large-sized sensor. The sixth generation of the dynasty, the Sony Cyber-shot DSC-RX100 VI, rewrote the rules again by adding a much more powerful zoom. It is a great pocket camera - and we are here to give you details of the best buy deals available today.

This camera has now been superseded in the hierarchy by the newer Sony RX100 VII - but the Mark VI are still being manufactured and sold, with an immediate advantage being a lower price.

Several older generations of the RX100 are also still on sale, but the RX100 Mark VI has one big advantage of its predecessors in that it has a built-in zoom with the equivalent of a 24-200mm reach. That is a superzoom range, and gives you the reach to shoot much more subjects than earlier versions that had a much more modest 24-70mm zoom. The big lens thankfully has a built-in image stabilization that will cut out the camera shake when using the telephoto end of the zoom.

The ZEISS Vario-Sonnar T*24-200mm lens is not the only talking point. At the heart of the camera is the large one-inch 20 megapixel sensor. Another new feature is a touchscreen. With this, the user can focus on the subject and fire the shutter with a press of the LCD screen, and the display also tilts up through 180º (which is a boon for selfie shooters and bloggers), and the LCD can also tilt downwards.

Other features include the hallmark 2.35million-dot pop-up electronic viewfinder and a 315-point phase-detect autofocus system.

Users also have the ability to capture images at full resolution at a blisteringly-fast  24fps, with autofocus and auto-exposure maintained throughout, while you can shoot 4K video using the full area of the sensor.

The best compact cameras in 2019