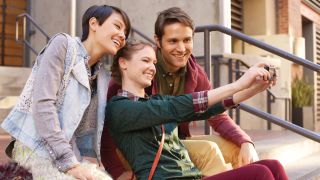 Available in black, pink or gold, the Sony Cyber-shot WX220 is a small, slim compact camera with a tight spec – namely an 18.2MP sensor, a 10x optical zoom and the now-standard-issue connectivity features of Wi-Fi and NFC.

Ease of use also comes high on this pocket-friendly camera’s agenda, but it’s no cheap and cheerful offering. Rather it also appeals to the more considered adopter by virtue of features like the BIONZ X processor and Sony’s premium G-series lens glass.

Naturally the camera shoots Full HD video, aided by Optical SteadyShot to keep things crisp, while Picture Effect and Beauty Effect modes are on hand among other for shooting portraits.

As the camera itself is diminutive – measuring just 92.3 x 52.4 x 21.6mm – so too is its back screen at 2.7in in size, with a standard 460k-dot resolution. Battery life is good for 210 stills, although it's really all about that 10x optical zoom, and the fact that fitting it into a super slim body is a feat in itself.

Unfortunately its svelte design does come with some trade offs. It lacks, for example, anything in the way of a grip on the front of the camera, and there's also no thumb rest at the back. Users will also have to take care not to obscure the flash with their fingers.

As expected, there are relatively few buttons on the WX220. The top plate sticks to the essentials of an on/off switch and slightly raised shutter-release button, the latter encircled by a lever for operating its zoom, which is smooth and fluid in operation. Top right of the back is a dedicated video record button, which will be very familiar to the majority of users.

In terms of performance and image quality, the camera’s 18.2MP sensor is capable of delivering a pleasing level of detail, even if it does exhibit some image smoothing in portions of the image under close examination. Image captured at high sensitivities – say shooting at ISO 3200 and above – also exhibit visible noise, but this is no better or worse than we’d expect from a camera in this class.

Reasonably priced, with a good if not quite outstanding performance, a decent zoom range and competent in-camera processing ability, the Cybershot WX220 is a sound choice for a pocket compact if you remain unsatisfied with what your smartphone’s camera can deliver.