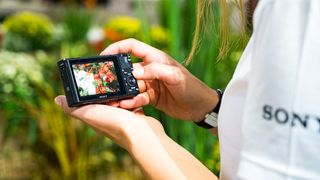 Scroll down for today's deals

Want a pocket camera that delivers results closer to that of a mirrorless camera or DSLR? Enter Sony’s high-end RX100 IV compact, a small-ish camera with a large-ish sensor.

Outwardly stylish, yet touted as ideal for situations where portability and discretion are key, this fourth-generation premium compact features the advantage of a 1in-type stacked CMOS image sensor with DRAM (Dynamic Random Access Memory).

This allows for the inclusion of 4K movie recording for the first time in this series, as well as additional features such as 40x super-slow-motion videos and high-speed 1/32,000sec image capture; you can be sure the decisive moment won’t be missed.

The lens provides the equivalent of a 24-70mm focal range in 35mm terms, with a digital zoom available should you need additional reach (with the trade-off of an image crop). At its heart we also get the latest BIONZ X processor, while the resolution of the camera’s EVF has been boosted to an impressive 2.35 million dots, from the 1.44million dots on the RX100 III.

Five-axis image stabilisation is also a boon, whether the RX100 IV’s users are shooting stills or video, while the flip-up LCD screen makes the camera ideal for selfies. There’s also a small custom button that can be set to more than 40 different options, including commonly accessed features such as ISO, metering or white balance.

In terms of picture quality, JPEGs from the camera are bright and vibrant, with true-to-life colours. A selection of Creative Styles is on offer if you want to tweak the appearance further, including Vivid, Landscape and Portrait, though the default Standard setting produces perfectly usable images in the vast majority of scenarios.

As for any negatives, some may find its price tag a little on the high side, especially since it misses some up-to-date features found on some rival models, most notably a touch-sensitive screen. Also, while the 280-shot battery life is par for the course for a point-and-shoot compact, we may have hoped for more from a premium model.

That said, the RX100 IV delivers image quality that is unquestionably among the best you’ll find from a camera of its size. It also comes with some neat features such as a handily collapsible EVF, and while the focal range is a little limited, it’s perfectly acceptable for a camera that you’ll readily slip into a pocket or handbag.