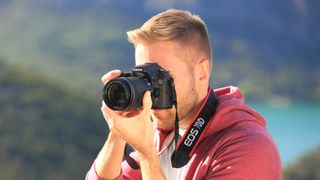 This well-built DSLR is an ideal enthusiast's camera, with Full HD video capture alongside sharply defined stills. Remote control is also possible thanks to built-in Wi-Fi, as is low-light shooting, due to a native ISO 12,800 setting expandable to an ISO 25,600 equivalent. It is not a current model, having been succeeded by the EOS 80D and EOS 90D, but it can be a great secondhand bargain

A Vari-angle touch screen, as on Canon’s EOS M-series CSCs, proves a further boon to aid framing and capture, particularly when capturing video. Stills shooting up to 7fps should also entice those who favor the occasional bit of action, wildlife or sports photography.

This EOS arrives with the much-trumpeted technological boost of Dual Pixel CMOS AF technology, which translates as swifter autofocus response. This is particularly handy when shooting video; we were able to swap between subjects and alter focal lengths mid recording with barely any noticeable blurring of the frame as we did so. Also helping would-be filmmakers is a built-in stereo microphone, plus there’s a port for an additional off-camera microphone secreted beneath a side flap.

Feeling solid when held in the hand, thanks in part to a reassuringly large handgrip, and with the practical advantage of semi pro features such as a second LCD window, we would suggest the standard EF-S 18-55mm f/3.5-5.6 IS STM zoom kit if you're just getting started and you don't already own any Canon lenses.

We did, however, appreciate the bonus of the tilting LCD here, which also happens to be a touch screen. Semi-professional users may also value the inclusion of Wi-Fi although, in something of an operational quirk, you can’t utilise the Live View video mode if Wi-Fi has been enabled via the camera’s menu.

To sum up, if you don’t need a full-frame DSLR or an even faster frame rate, the EOS 70D looks, feels and performs almost as well as a pro DSLR. Almost. Look out also for the newer Canon EOS 80D or Canon EOS 90D if your budget will allow.

With a great build, a flexible touchscreen and lots of lenses to choose from, what's not to like?