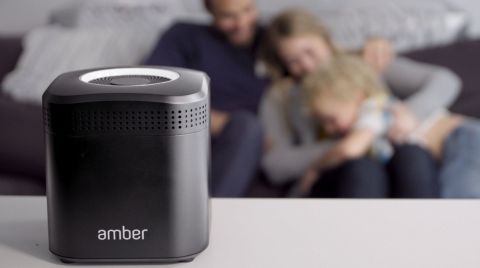 This early sample of a ‘personal cloud’ stores and shares family photos and videos in private, but it’s hampered by a poor app

Remember that big family holiday you took last year? Where are all the photos? If your family is like everyone else’s, it’s likely that they exist across multiple smartphones, tablets and cameras, probably never to be united and archived despite good intentions. Cue Amber, ‘smart storage’ that promises to backup, collate and categorise photos and videos from multiple devices without ever going near the internet. Anyone in the family can then access all the photos taken on a specific trip at anytime on a phone, tablet or laptop.

Amber is a ’personal cloud’, an overhaul of the network attached storage (NAS) concept that means you can swerve services like Google Photos, but supposedly do it in an easy-to-use way. Why? Google Photos is free and backs-up phone photos to the cloud. It even allows you to share albums and individual files with others. That’s all true, but Google throttles the resolution of photos unless you pay fees.

The search engine then also has your most personal data. As well as keeping all your photos in their original high resolution, part of Amber’s appeal is that it protects your private data while it shares it, using end-to-end encryption. Connected to a TV via HDMI (or wirelessly to ChromeCast or DLNA-compatible devices), Amber can also display photos and videos on a TV.

Installation is relatively easy – you just attach it to a router over Ethernet LAN and launch the Amber Manager smartphone app – though you do have to set-up an ID with the LatticeNest Cloud Service and digitally attach it to Amber, which takes a few minutes and adds an unwanted layer of administration. Camera roll auto-backup is obligatory, of course, and there’s also Amber LiFE software for iOS, Android and Windows/macOS desktops. A single, unified app would have been less confusing. Setup involves a ton of options (phone and PC folder backup to using Amber with macOS for TimeMachine backups), but in practice it’s no less long-winded than a NAS drive.

Every family member needs to install the Amber LiFE app on their phones, though one phone gets parental controls. As soon as you open the app, it backs up your camera roll to Amber, and it’s easy to use the app to look at, and share, any photos on Amber.

Amber backs-up your phone's photos really well. From your camera, it’s rather more manual, and limited, and requires a careful setup. Once that’s done it keeps everything secure and safe, but do the Amber apps let you access your treasure trove of photos on your phone when you’re away from base, perhaps to show a prospective client? Yes, but the apps are too slow to do that in any kind of impressive way.

During our tests the app took a second or so to do anything – even show a photo – and it also crashed a few times during our test. Streaming videos from Amber to the smartphone app is also laggy, and finding photos backed-up from other phones is not easy.

Nor can photos be sorted by the GPS location they were taken, which is a shame given its suggested use for holiday photos. It’s also supposed to use face recognition and detection, in our tests the 3,000+ photos we uploaded weren’t enough for it to work its magic. However, our review sample was an early unit, and Amber was keen to stress that new hardware was coming in early 2020.

Does your family need a ‘personal cloud space’ for your photos? Amber is a private, secure cloud for a family; if every member syncs their phone with Amber, it can host a definitive collection of photos from, for example, a family holiday. It’s a nice idea and it works really well for backing-up the camera rolls of multiple phones, but it’s not as not as slick as it could be; it needs a faster, more reliable smartphone app.

All in all, Amber is a nice concept, but it loses its way in practice and isn’t the anti-NAS is pretends to be. That said, for families dead-set against using and/or paying Google Photos, as well as syncing-away their personal data to the cloud, Amber could well be worth revisiting very soon.