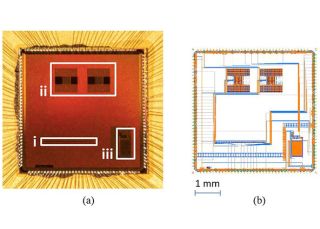 No matter how many technological breakthroughs the humble camera experiences, we can never seem to get away from the old adage 'the human eye is more advanced than any camera'. And this is clearly true - no camera can deal with exposure and focus in the way the human eye can. However, German researchers have apparently developed a pixel design that has the potential to hugely increase dynamic range, which could ultimately lead to even more camera technology advancements.

Dynamic range is one of the major areas that camera manufacturers have been working on. It's essentially the amount of shadow and highlight detail that a photo is able to capture. Even though an image might not initially seem to have captured a wide range of detail, cameras with decent dynamic range will allow you to extract this information from the RAW file. Generally, the better dynamic range a camera has, the more information you'll be able to capture.

A human can sit in a shaded room, gaze out of a window into a bright, sunny scene and be able to see it all without any over or under exposure. However, the average camera will struggle to achieve this without some serious in-camera processing. In particular, cameras with small sensors, such as camera phones, don't tend to have very good dynamic range. This is why you would be careful about shooting a backlit portrait on an iPhone (although, admittedly, smartphone in-camera processing has become astonishingly good in recent years).

However, the new pixel design developed by German researchers isn't limited by the point at which it saturates, which means that it can continue to capture highlight data when other sensors would become overwhelmed. As reported by DP Review, the 'self-resetting pixel' doesn't 'clip' when it becomes saturated like conventional CMOS chips. Instead, it resets and has a circuit that counts how many times it had to reset during the exposure.

This would mean that you could focus your attention on capturing shadow and mid-tone subject perfectly, without having to worry about blown out highlights. This could revolutionize photography and make certain photographic situations, such as mid-day sun and harsh shadows, much less difficult to work with.

However, before you get too excited, this research is primarily focused on video for industrial applications and is still in its early stages. We're unlikely to see this technology in consumer cameras for quite a few years - if ever at all.

As for whether cameras will one day surpass the human eye? Well, at the rate camera technology is progressing, we wouldn't be surprised if this happens one day. And this new pixel design might just help…