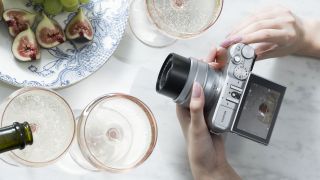 Tilting screens are great, but why do they have to stay attached to the camera at all? (Image credit: Fujifilm)

It does sometimes feel like camera makers have been sitting on their hands and turning out the same designs year after year without ever stepping back and thinking about how cameras could be designed just that little bit better, with technology that’s already out there.

So this is an open question from Digital Camera World to every camera maker. Is a detachable display really that difficult?

Just think about it. With a detachable screen there are no pivots to bend, no fiddling around with awkward angles, no more wet knees as you set up a ground level macro shot – and no more having to peer at a tiny flip-forward screen three meters away when you’re vlogging, even assuming you have a camera where the screen CAN flip forward.

We don’t really mind how they do it. They can use a cable if that’s what it takes. More than likely, though, it would need a combination of Bluetooth and Wi-Fi.

So if that’s the case, how is that different to using your phone and a remote app? As we all know, wireless-to-smartphone connections can take a lot of fiddling, can drop out unexpectedly and generally just take time to set up and operate. Essentially, this is because for smartphone connections the camera has to set up a Wi-Fi network and then you have to tell the phone to connect to it. If you have an iPhone, you'll know that iOS is very picky about letting apps swap Wi-Fi networks without permission – and quite right too.

So surely camera makers could get round all this with a bespoke, dedicated device? Why couldn’t the detachable screen have a factory-set automatic wireless connection to the camera all the time? These would be two dedicated bits of hardware which only ever needed to talk to each other. Would they even need to stick to strict Wi-Fi and Bluetooth communications protocols?

And just imagine. You could actually use your smartphone phone for what it was originally designed for.

So, camera makers, what we want to do is put the camera on a tripod, detach the screen, step back out of the shot, grab a selfie or a group shot, shoot a vlog, fetch a cappuccino, whatever – all from a distance with the screen in our hand offering a live view display and remote control.

Is that so difficult?