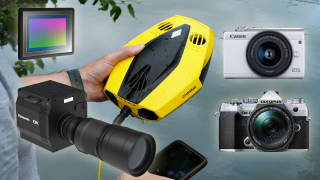 This week has been a real potpourri of camera news. We've got camera leaks, cutting-edge cameras, underwater cameras, and a camera so exciting that… Canon just snuck it out, with absolutely zero pomp or fanfare.

In particular it's been a great week for Micro Four Thirds, thanks to a new Sony image sensor that offers the format resolution on the scale of a Sony A7R, as well as 8K video.

Speaking of, Panasonic's 8K camera got an early look, as did Olympus' long-awaited (as in, four years of waiting) new camera. We also saw a cool new underwater drone and, yes, that stealth-announced Canon camera. These are the five biggest camera news stories of the past week…

Sony has revealed a new high-resolution Micro Four Thirds image sensor, which would deliver 47MP shooting and 8K video to Olympus, Panasonic and other cameras using the standard.

This would enable Micro Four Thirds cameras to shoot with more megapixels than most full-frame mirrorless cameras, bringing its resolution in line with hi-res models such as the Sony A7R series.

One of the most long-awaited new cameras has finally had an image leak, as the Olympus OM-D E-M5 Mark III has been revealed – and it is claimed to possess "E-M1X features for a fraction of the price".

Indeed, close inspection of the image reveals some layout redesigns that are reminiscent of the company's two flagship E-M1 models. This lends credence to rumors that the Olympus OM-D E-M5 Mark III will include features previously exclusive to the flagships, such as the 20.4MP phase detect AF sensor.

The image of the new camera was leaked by the gumshoes at 43 Rumors, which also claimed that it would be officially announced next month. This would make sense, as October marks the actual anniversary of Olympus' founding in 1919…

Tech behemoth Panasonic has revealed further details regarding its 8K Organic sensor, complete with a prototype AK-SHB800GJ camera unit. While the concept has been on the drawing board for some time, the new information represents a big step forward, not just for a specific camera, but for Panasonic's future video capture philosophy and product road map.

While conventional CMOS sensors have closely associated light conversion and charge storage components, the organic model enables these functions to be discrete, streamlining the process of creating a digital image. The unit employs a sheet of organic photoconductive film placed on top of the CMOS assembly which provides three key advantages to videographers…

The EOS M200 is a new and upgraded version of Canon's beginner orientated EOS M100. It's designed for newbies rather than experts, and the changes over the older model aren't massive, so it's arrived without much of a fanfare – but deserves a closer look anyway.

The design of the new Canon EOS M200 is very much like the existing EOS M100. In fact, you'd have trouble telling them apart from the outside. There's no viewfinder, but there is a flip-up selfie touchscreen display at the back. It's designed to be a very simple camera and doesn't even have a mode dial – instead, most of the control happens via the touchscreen display.

It's too basic to be one of the best mirrorless cameras all round, but it could prove to be one of the best cameras for beginners. The Canon EOS M200 has a 180-degree touchscreen for selfies and vlogging, and comes in a choice of white or black. It uses a 24-megapixel APS-C sensor, like so many of Canon's consumer level models, and takes the company's EOS-M mirrorless lenses…

While the portable size and easy operation are aimed to please industrial users, such as technicians inspecting the hull integrity of ships and scientists conducting marine research, the newer, more accessible drone will no doubt catch the attention of photographers and videographers.